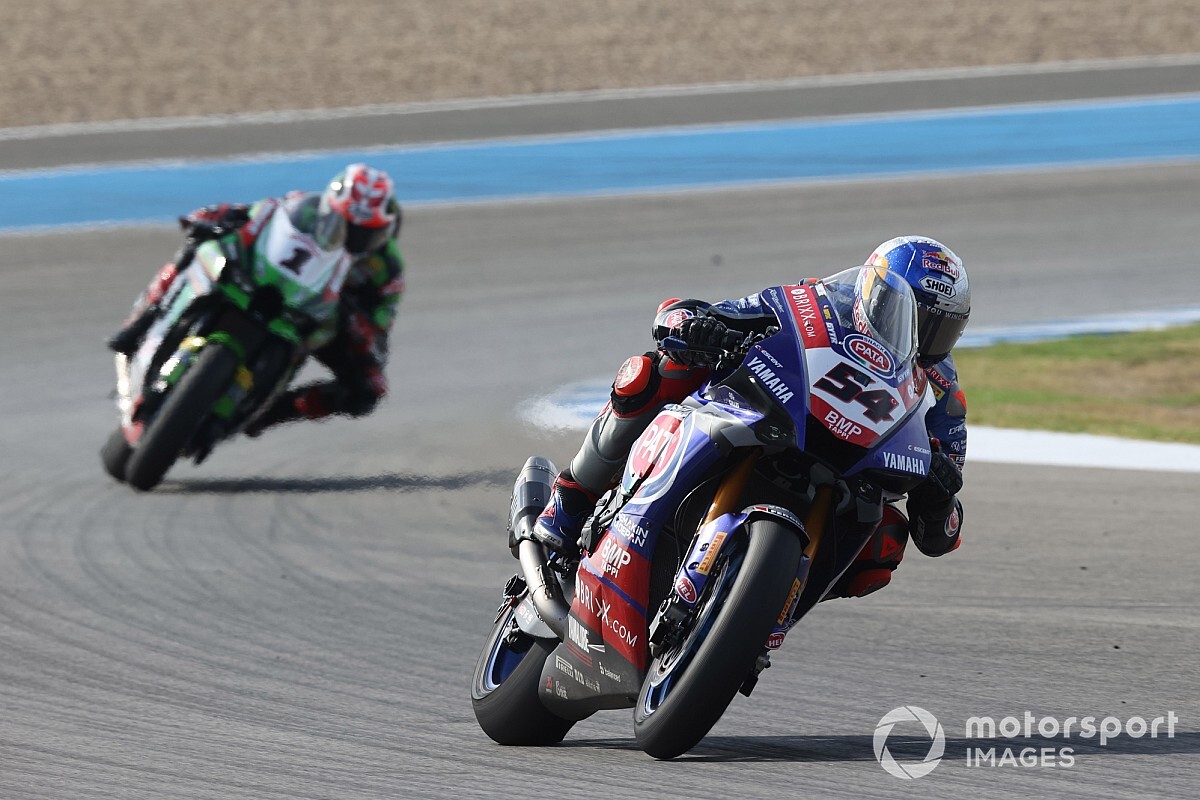 Following the death of Supersport 300 rider Dean Berta Vinales on Saturday, the WSBK held the first full-distance race of the weekend on Sunday morning at the same time slot as the now-cancelled Superpole race.

Starting from pole position, Razgatlioglu held the lead into Turn 1 from Rea and Yamaha teammate Andrea Locatelli, but was passed by the six-time WSBK champion into the long Turn 4 left-hander.

Razgatlioglu continued to keep the pressure up on Rea after dropping to second, not allowing the Kawasaki rider to pull away at the front of the field.

The two championship protagonists came to blows on lap 7 as Razgatlioglu dived down the inside of Rea into the Turn 6 hairpin and touched the rear of his Kawasaki, but both riders were able to continue without any visible damage to their bikes.

The decisive move of the race came at the start of lap 14 when Razgatlioglu was able to outbrake Rea into Turn 1, grabbing the lead of the race for the first time since the opening lap.

Rea was unable to respond to the pace Razgatlioglu was showing in clean air, allowing the Turkish rider to take the chequered flag by just over half a second and claim his ninth victory of the season.

It marked the latest occasion when Razgatlioglu emerged on top in a straight fight with Rea, but the two riders are separated by just six points going into the final race of the weekend.

Scott Redding completed the podium spots on the factory Ducati after passing the second Yamaha of Locatelli on the final lap of the race, blasting past the WSBK rookie into the Turn 6 right-hander.

Honda’s Alvaro Bautista rose from ninth on the grid to finish fifth at the flag, making it four different manufacturers inside the top five.

Ex-MotoGP rider Loris Baz impressed on his return to WSBK on the Go Eleven Ducati normally ridden by Chaz Davies, finishing as the top independent rider in sixth.

Behind, Michael van der Mark was the top BMW rider in seventh after pipping the Motocorsa Ducati of Axel Bassani by just 0.090s to the flag.

Alex Lowes endured a tough opening lap on the second of the factory Kawasakis, dropping from the front row of the grid to outside the top 10. He recovered enough to bag ninth place, just ahead of the GRT Yamaha of Garrett Gerloff.

Leon Haslam started ahead of his Honda teammate Bautista in eighth, but finished down in 11th place after being passed by Gerloff 11 laps into the race.

Replacing the injured Tom Sykes following the Briton’s crash in Barcelona last week, Eugene Laverty was classified 12th on the second of the factory BMWs.

Three riders failed to make it to the finish in the opening race of the weekend, with Michael Ruben Rinaldi the most high-profile retiree after losing the front-end of his Ducati under braking for Turn 3 while running inside the top five.