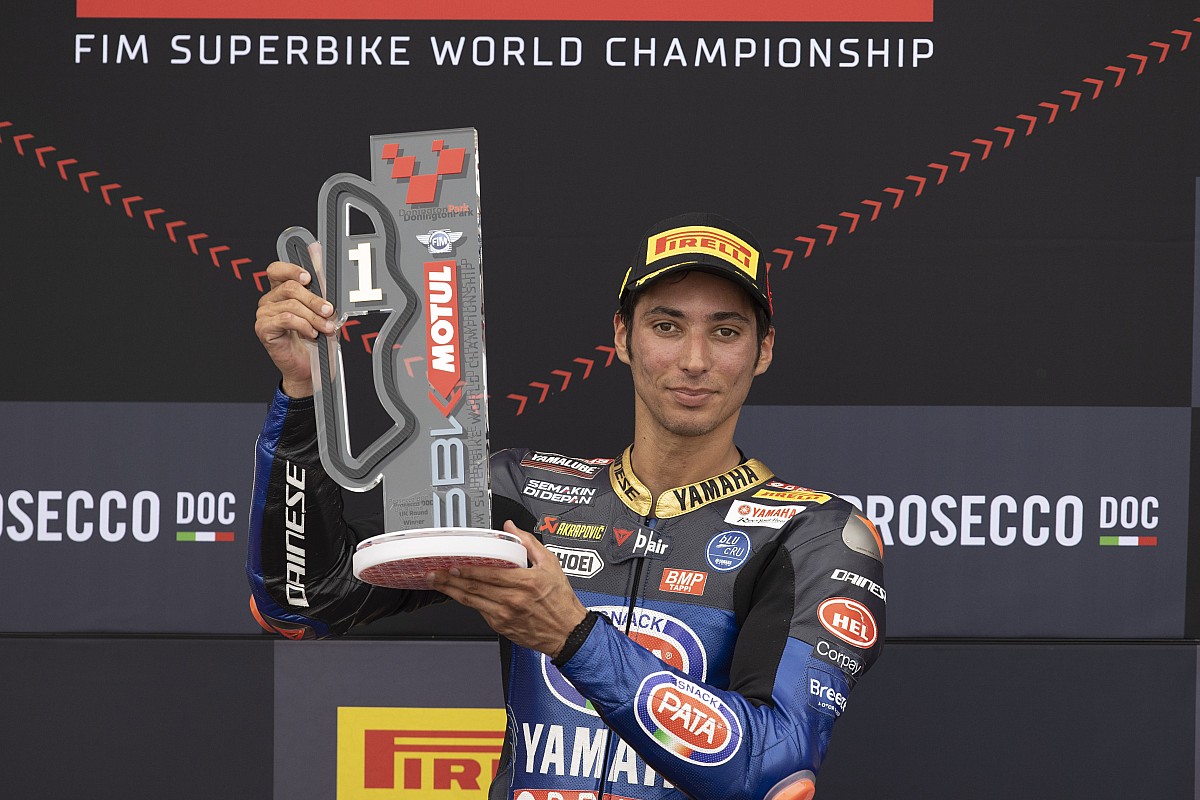 
Yamaha rider Razgatlioglu was facing an uphill battle to remain in the championship hunt ahead of the fifth round of the season at the Leicestershire track, having slipped 79 points off Ducati’s Alvaro Bautista in the standings.

Not only was Razgatlioglu struggling to match both Bautista and 2021 title adversary Jonathan Rea, the Turkish rider couldn’t pick up a first win of the year until the Superpole race at Misano last month.

However, the 25-year-old finally put his championship challenge back on track last weekend by dominating proceedings at Donington, winning each of the three races to clinch a perfect score of 62 points.

It marked Razgatlioglu’s first career treble since WSBK switched to a three races per weekend format in 2019, and made the Yamaha rider feel he has found the speed that helped him clinch a maiden title last year.

“Firstly, I would like to say this year we did not make a good start,” Razgatlioglu said. “But finally this weekend we scored three victories. This is normally my dream. I’m really happy this weekend.

“Thanks to my team because they did an incredible job. Now I’m feeling like last year’s Toprak because the riding style is ‘Toprak style’ [again]. And I’m really happy.

“The real Toprak [has] come back.”

Lining up third on the grid for the opening two races of the weekend, Razgatlioglu employed the same tactic of jumping Kawasaki duo Rea and Alex Lowes at the start and then building an early gap to prevent a counter-challenge.

The final full-distance race on Sunday was tricker as Rea managed to briefly pass him twice in the early laps, but Razgatlioglu was able to strike back immediately on each occasion and then cruise to a one-second victory over Bautista, who later overtook Rea for second.

Explaining how he managed to score a triple win, Razgatlioglu said: “The Superpole race was very fast because everybody was pushing every lap because you don’t need to save the rear tyre.

“We used the Q [qualifying] tyre. Unbelievable pace, I saw many 1m26s [laps]. This is a very fast lap time.

“I knew Johnny was following me. I was just waiting and keeping the rear tyre. I saw my board ‘0.3 [seconds]’ and after that I was pushing again. Three victories today. I’m really happy.”

Razgatlioglu has slashed the deficit to championship leader Bautista to 43 points following Donington, helped by the Ducati rider crashing out of second place in the first full-distance race of the weekend. The gap between Razgatloglu and Rea sits at 26 points or just over one race win.

But the Yamaha rider is refusing to think too much about the championship with seven of the 12 rounds still to run, including Most in late July before the mid-season break, an approach he followed throughout his title-winning campaign in 2021.

“We will see the next races because the championship has not finished yet. We’ve got many races and we will keep fighting,” he said.

“I don’t know how many points [I’m down on Bautista]. I’m just focused on the job.

“For the Most race I will fight again for the win. We will see.

“Also at Most Ducati is normally very strong. Anyway, we keep fighting for victory. We will see. I see some new asphalt. Normally I like it at most tracks.

“Also Johnny is fast and everybody is really fast this year. We keep fighting again for victory. I’m not looking on the championship side, I’m just looking race-by-race.”