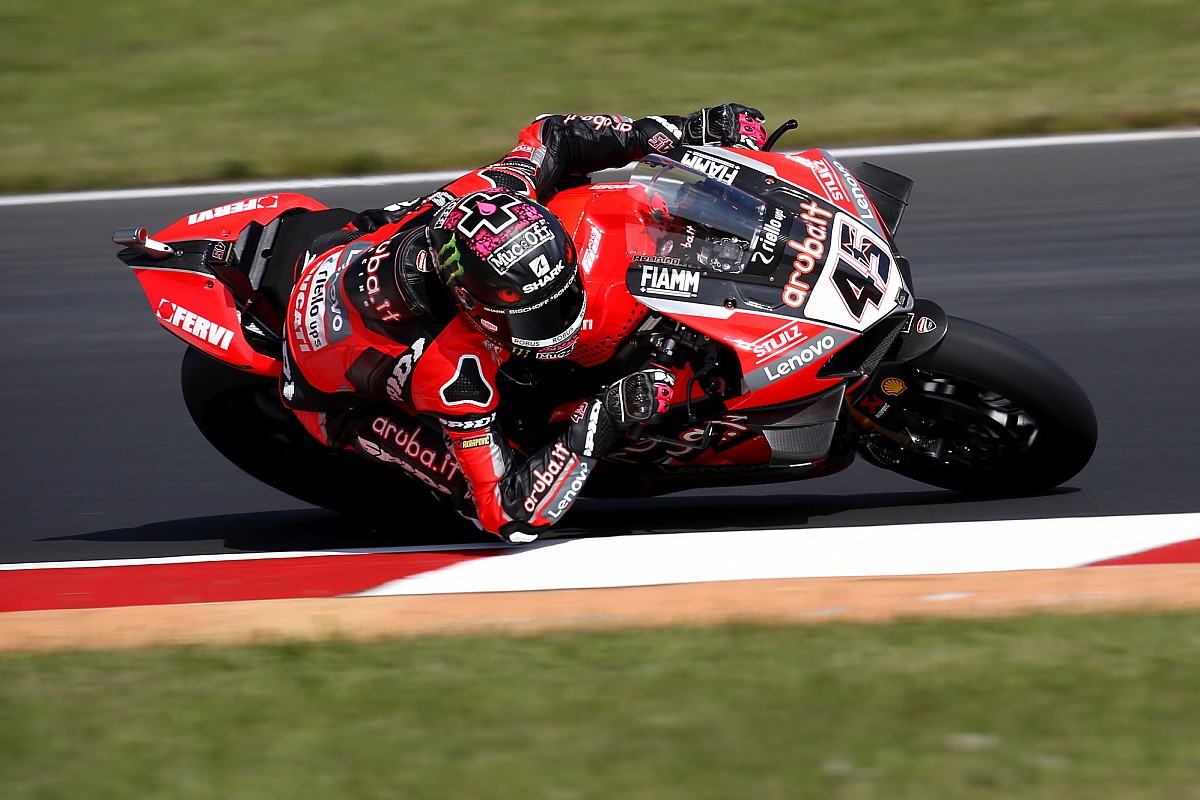 Yamaha rider Razgatlioglu made a late inside move on Redding’s Ducati at the sweeping Turn 20 right-hander to claim his fourth win of the 2021 season and close to within 12 points of championship leader Jonathan Rea.

Redding made his displeasure with the move clear in parc ferme, and speaking to reporters afterwards the British rider – one of the most vocal critics of the safety standards at the Czech track – accused Razgatlioglu of making a “desperate” lunge that could have resulted in both riders crashing.

“If I look at the big picture, I should be happy with second,” said Redding. “I led 90 percent of the race, just to have a little bit of a naughty move like that… that’s what makes me angry.

“We already discussed about safety this week and in my opinion I wouldn’t do anything a bit risky. The way Toprak was overtaking at the end was very desperate and I don’t like that. [He was] coming from a distance back, and I almost had my knee to the floor, it’s a bit late.

“If I’d committed to that corner, he would have hit me and we would have both crashed. It was only because I thought it’s possible he’s gonna do it [that we didn’t crash]. [I had to] expect it.

“It just pisses me off a little bit, because anyone can do that, but is it worth the risk? I would have been really angry if we both crashed. What’s the point? Ok, you get five points [extra for winning compared to finishing second], but you could have lost those 25 points.”

When Redding’s remarks were put to Razgatlioglu, the Turkish rider admitted he had made a mistake as the rear of his works Yamaha R1 was sliding, but said the move was otherwise fair.

“At the last corner I did a mistake with Redding,” he explained. “I tried a very hard braking and also [I knew it was] my last chance. The rear was sliding too much, I couldn’t enter [the corner properly], I am a little bit touching [Redding].

“He is angry, but this is racing. I am happy he didn’t crash. I tried every corner because I needed these points for the championship.”

Razgatlioglu had spent most of the race battling Kawasaki rider Rea for second place before the championship leader suffered a low-side crash at Turn 1 on lap 14 of 22.

Rea remounted and was running in the points in 11th when he crashed again at the penultimate corner.

The six-time world champion described the first crash as “very strange”, likening it to his fall in last month’s Donington Park race, and suggested the second one could have been linked to Jonas Folger’s BMW suffering terminal mechanical problems at the same point of the track.

“The first one, in the chicane, I was just about on [the racing] line but I crashed early on the bumps,” recalled Rea. “Similar crash to Donington Park, when we have some front chatter, the engine braking pushing feeling takes weight off the front and I lost the front.

“After I picked up the bike I could see I was in 11th. I was just riding around and honestly I don’t know what happened in the penultimate corner. I wasn’t pushing super-hard and I just crashed.

“Folger asked me, ‘did you hit the oil? My bike was broken’, but I don’t know. I was doing everything ok and then I was in the gravel.”