Wolff: Mercedes F1 garage looked like a Lego car had been dropped 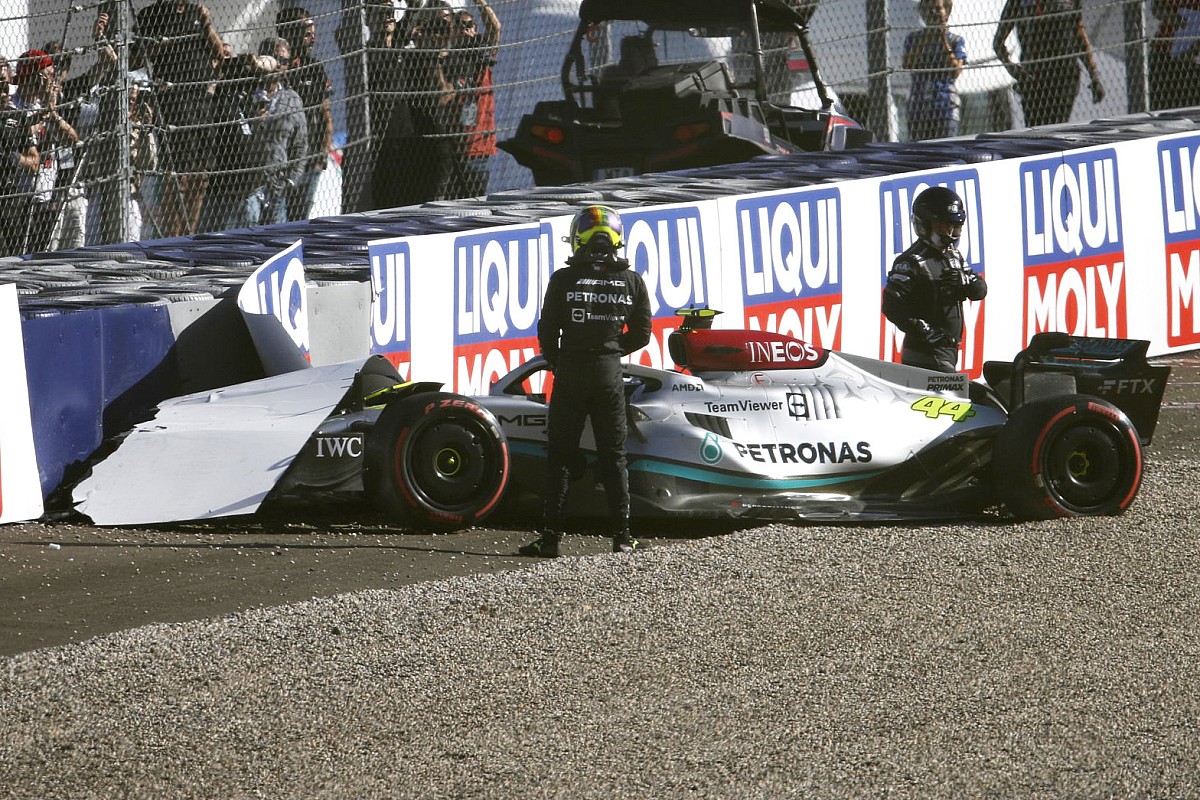 
Q3 was twice red flagged when Hamilton and then Russell suffered similar incidents of a snap of oversteer aboard the W13 to crash into the wall and end their credible threat for sprint race pole, which was claimed by Max Verstappen.

Hamilton careered across the gravel at Turn 7, the car suddenly gripping after he steered into the slide, before hitting the barrier side-on to crumple both front- and right-rear corners.

Meanwhile, Russell slide backwards into the wall on the exit of the final turn after his lose.

Team boss Wolff offered a damage report, saying both cars will have new floors, the gearboxes need checking and Russell will likely require a new rear wing plus “lots of little bits and pieces”.

Wolff reckoned: “Yesterday in the garage, in the early evening, it looked really like somebody dropped a Lego car on the floor.”

He praised the late-night efforts of the mechanics to repair the cars before joking that “a third” of inflation-adjusted increase, revealed yesterday, in the budget cap had now been spent from one session.

The Austrian added that he would rather have a competitive car fighting for pole and ultimately shunting rather than be a ‘Steady Eddie’ in the lower reaches of the top 10.

He said: “We had a competitive car. The last few corners that Lewis attacked were the fastest overall.

“Will we have fought for pole position? I’m not sure, but we would have been maybe within a tenth, a tenth and a half of the frontrunners… on a circuit where our car really wasn’t that good before. So that’s an improvement.

“I’d rather have two cars in the wall fighting for pole than a car that is P8 and drives ‘Steady Eddie’.”

When Wolff was asked by Motorsport.com to explain the cause of the shunts – with the similar cases of snap oversteer for Russell and Hamilton giving way to speculation of wind or an aero imbalance – he implied it might have been driver error by carrying too much speed.

Wolff said: “The car is still tricky to drive and now that we can actually fight for front positions, I’m really happy to see that they attack.

“The same a little bit for George. He saw that he was up on his delta time.

“That was a particular strength of his previous rounds, and it went too far.

“So, whether there was wind or any other conditions, I think the summary is the car is tricky to drive but it’s faster now and for me that’s absolutely OK.”