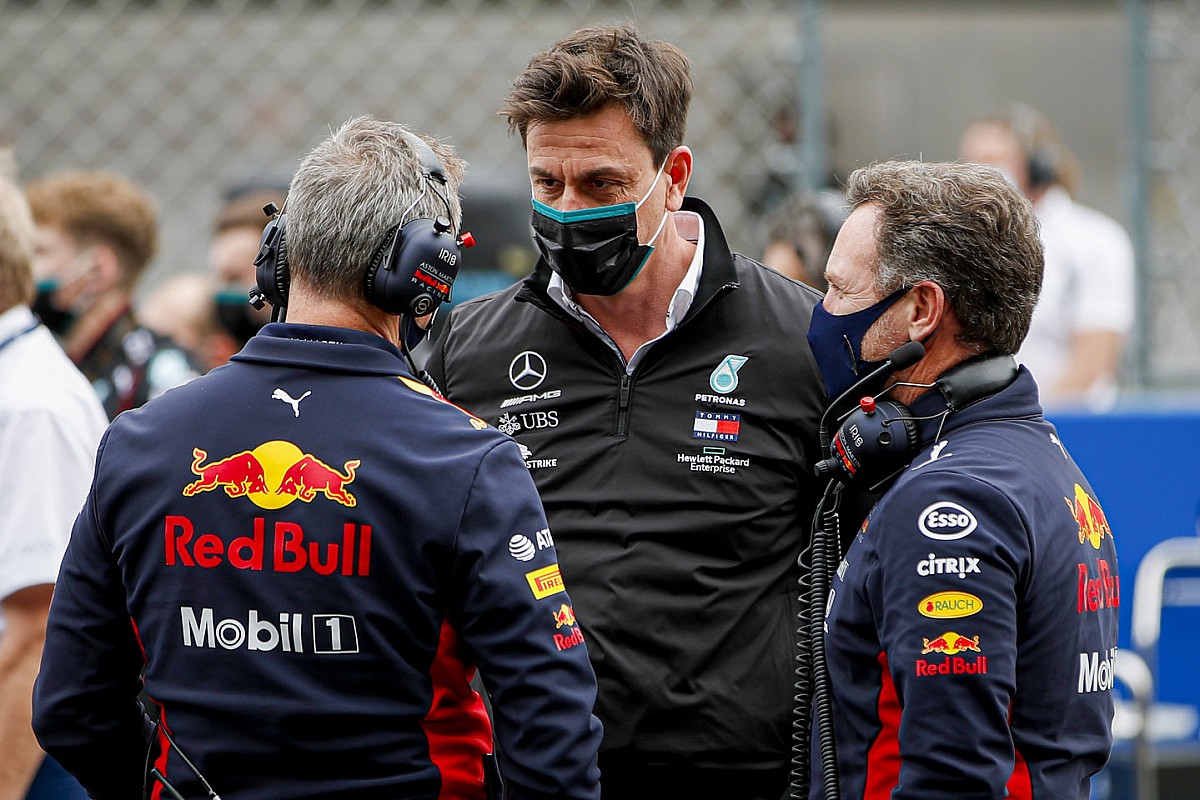 Certainly on Thursday in Hungary the respective bosses of Red Bull Racing and Mercedes suggested that they want to put that particular event behind them after the FIA stewards decided not to take the matter further.

“It wasn’t the response that we were hoping for but we accept it and now we close the chapter and move on,” Christian Horner insisted.

“I think F1 needs content and controversy and as long as it is around the sport it can be quite entertaining,” said Wolff.

“But there are certain boundaries that we need to respect, and the sport should unite and not create more polarisation, and especially in a sport that cannot be prouder at that stage yet about its diversity and equality.

“We need to just get the words right, and therefore let’s aim to de-escalate rather than to fuel.”

The reality is that those particular words represent just a superficial truce in a battle that is set to continue not just to the end of this season, but into future years as well.

For Mercedes in 2021 the target is to achieve not just an eighth world championship for Lewis Hamilton personally, but the eighth in a row for the team. The pain of losing in the last year of the current rules would be intense.

Lewis Hamilton, Mercedes in the garage

Red Bull, meanwhile, has not won since its last title with Sebastian Vettel in 2013. The team knows that it finally has a car that can give Max Verstappen the first title that he clearly deserves, and it’s also the last year with Honda and full factory support.

Both teams are also well aware that the 2022 regulations represent a complete reset, and while their level of resource and overall momentum means that they are likely to continue to be the pacesetters, that is by no means guaranteed. Nether team wants ti let this year’s title slip away without a fight.

Against that background, it’s understandable that the Silverstone crash, with its loss of points as well as a $1.8m impact on its budget cap spend, became such a focus for the Milton Keynes team.

And Horner and Wolff are at the very heart of the storm. They are two powerful personalities who failed to make it as racing drivers but, helped by being in the right place at the right time when they took up their current roles, have established themselves as strong leaders off track.

They are far from the first F1 team bosses to go head to head. Back in 1976 McLaren’s Teddy Mayer and Ferrari’s Daniele Audetto fought as hard as their respective drivers James Hunt and Niki Lauda, and in later years and representing the same teams Ron Dennis and Jean Todt were hardly drinking buddies.

Even since that Michael Schumacher/Mika Hakkinen era the stakes have become ever higher. The world championship has always been the goal, but now teams are much larger with more employees, and there’s more money to be earned and spent.

In some ways, Horner and Wolff carry much bigger responsibilities on their shoulders than their predecessors, and that in turn ramps up the pressure on them.

“F1 is a competitive business,” Horner said on Thursday. “It’s competitive on track and it’s competitive off track. Obviously this year we have already seen sagas over pit stops flexi wings amongst other issues that you guys aren’t even aware of.

“But the competition is fierce. And in a competition like we are in, it’s all about marginal gains, and leaving no stone unturned.

“It’s the first time Mercedes have been in this position in the hybrid era, and our focus is on trying to get the most performance we can out of our drivers, out of our cars, out of the whole team. And I think the team has done a phenomenal job in the first half of the year, and it’s all about what we do in the second half of the year.

“And I think of course that rivalry will be intense, and I hope that there is no precedent set from what happened at the British GP. But it’s inevitable in a sport like we are in, with what’s at stake, that there will be strong competition on-track and off-track, because that’s F1.

“And ultimately the biggest benefactors from that are the viewers from seeing hopefully exciting and fair competition.”

Above all team bosses protect their own employees, and naturally the drivers are top of the list. Just as Horner was upset by a perceived lack of respect as Hamilton celebrated at Silverstone while Verstappen was in hospital, so Wolff was frustrated at what he saw as unfairly critical comments about his driver from Horner and Helmut Marko.

More was said in this week’s formal submissions to the FIA stewards from Red Bull, and in the hearing itself, which led to a swift response in the media from Mercedes, which noted “we hope that this decision will mark the end of a concerted attempt by the senior management of Red Bull Racing to tarnish the good name and sporting integrity of Lewis Hamilton”.

That was a pretty direct message.

“I think we wanted to bring a little bit of respect back to the discussion,” Wolff explained. “We understand that emotions can run high and it is always a matter of perspective and perception but we felt that that line was overstepped.

“The remarks that were made during and after the Silverstone Grand Prix were just elaborated further in the document and not always looking at the incident only but giving it a wider taste. And that was beyond other things, just a step too far.

“I think comments that were made surely out of emotion were going directly against a seven-time world champion. Words like amateurish should have no place.”

Did Wolff expect an apology on Hamilton’s behalf?

“Everybody needs to decide whether they want to apologise or not,” he said. “We felt that the comments that were made during and after the race and then in a written statement and in the meeting itself were below the belt but it’s not up to me nor would Lewis want to demand any apologies.”

Horner claimed not to be too concerned by the viewpoint of his rival.

“I think the statement by Mercedes is a little antagonistic, shall we say?,” said Horner. “But I don’t really read too much into it.

“It’s never been anything personal about a single driver. It’s about the events that happened and a competition between two guys. It’s not individual to any driver. If that had been any other driver, the reaction would have been identical.

“There’s nothing personal about it, but even a seven-time World Champion can sometimes make mistakes or misjudgements. That’s just a fact of life. So at no point has this been personal about Lewis, and it would have been identical with any other driver and any other team on the grid.”

So what of the rest of the season? In the end it’s all about what happens on track.

It’s in the hands of Max Verstappen and Lewis Hamilton to keep it fair – both are ultimate racers and are quite capable of running wheel to wheel and on the very edge without overstepping the limits, as they demonstrated at several races earlier this season.

“It is motor racing and motor racing is dangerous and this is why I think respect and cool heads need to prevail on the track,” said Wolff. “I think that is a great championship, and let’s continue watching.

“I think that is the narrative that is always exciting, when you have such a rivalry between great drivers, and it is what it is. As we know from life it is never 100% right or wrong, when you look at the comments it is pretty even. 50% say Lewis was at fault, and 50% say Max is at fault. So everybody will have their own perception.”

“I think we are set up for a fascinating second half of the year,” said Horner. “It’s inevitable that these two drivers are going to be starting within close proximity at potentially the remaining 12 or 13 races.

“We want good racing. We want hard and fair racing, and I think that’s exactly what we would like to see across the balance of this championship.”

Whatever the drivers do on the circuit, off track things are unlikely to get any quieter.

“It’s a competition,” said Horner. “And every department in our business is competing, like for like, against Mercedes, our drivers, throughout the whole team, and we’ve seen the intensity of that competition, so far this year. I’m sure the second half is going to be just as fruity as the first half.” 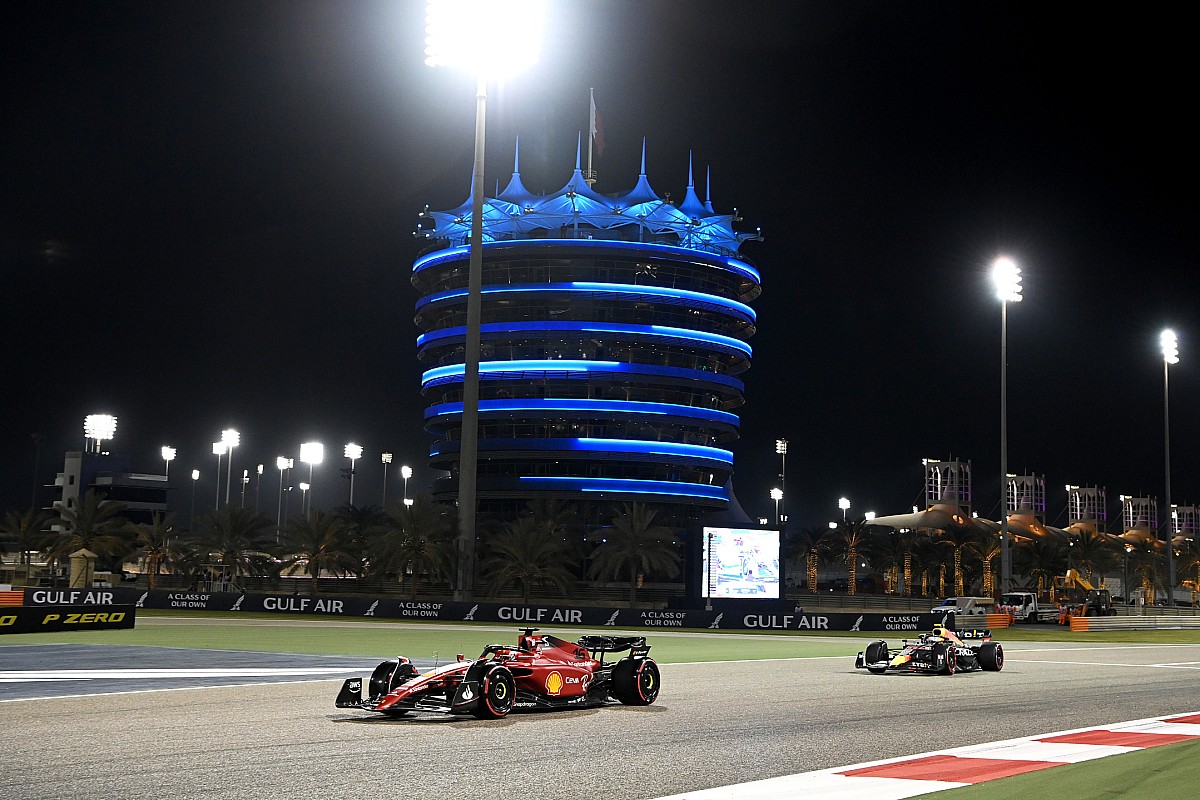 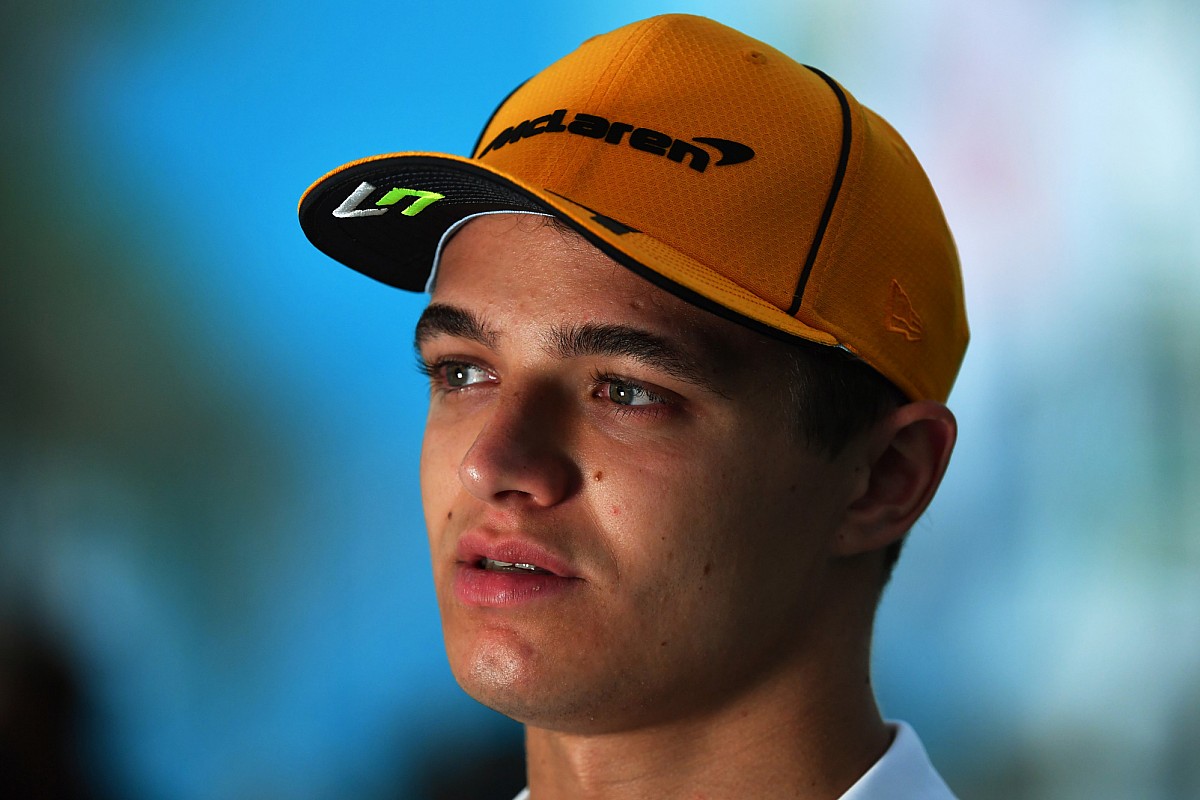 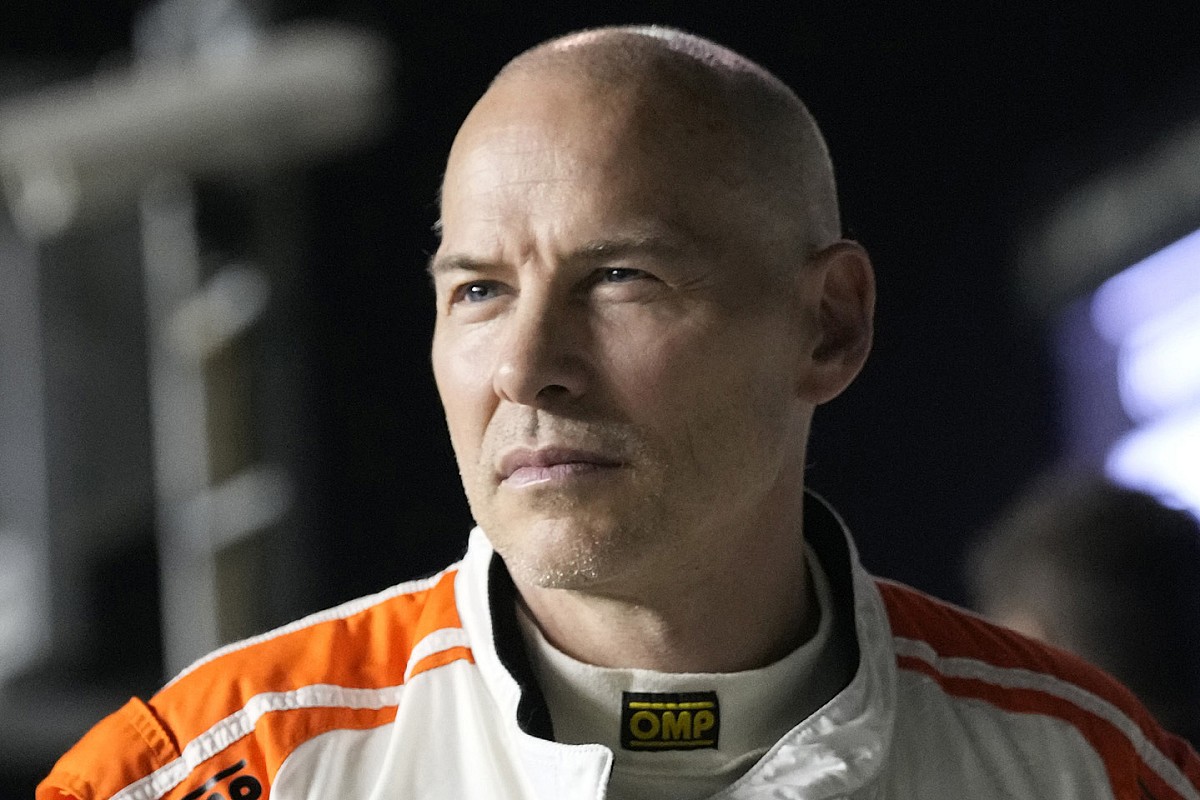 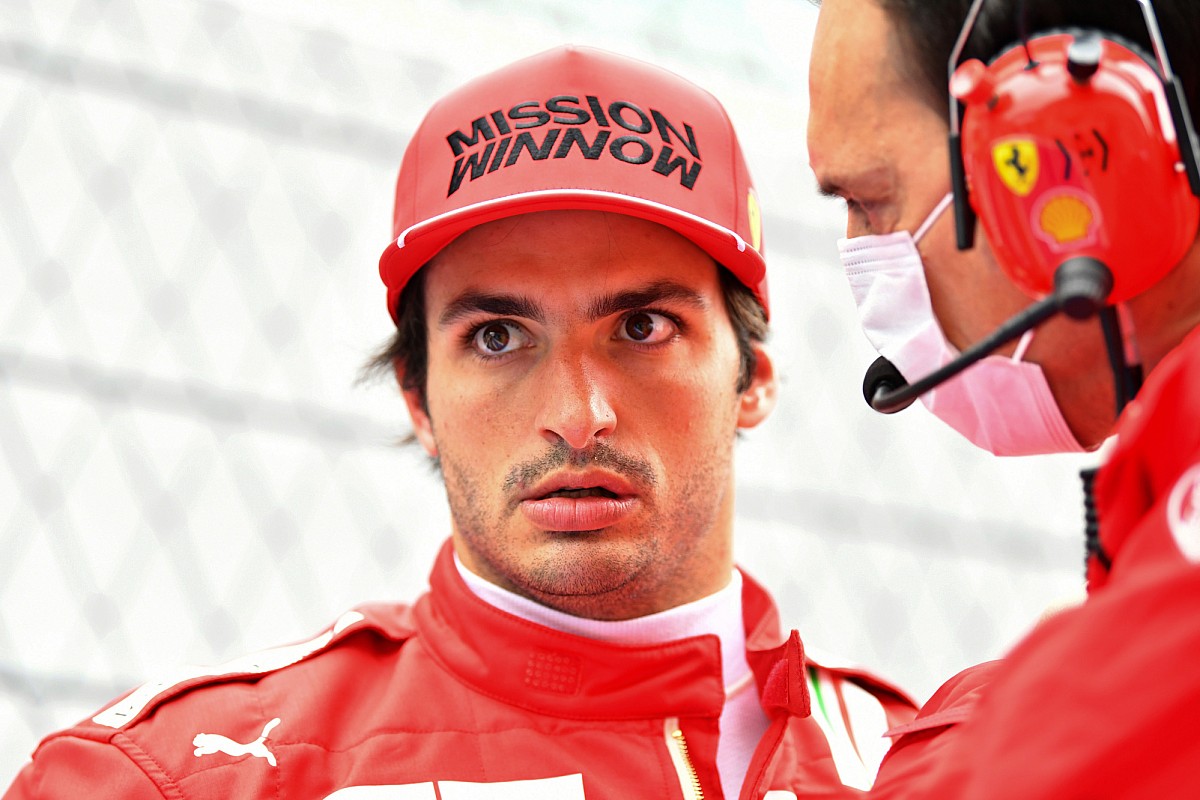 How high-tech F1 has changed the race engineer role