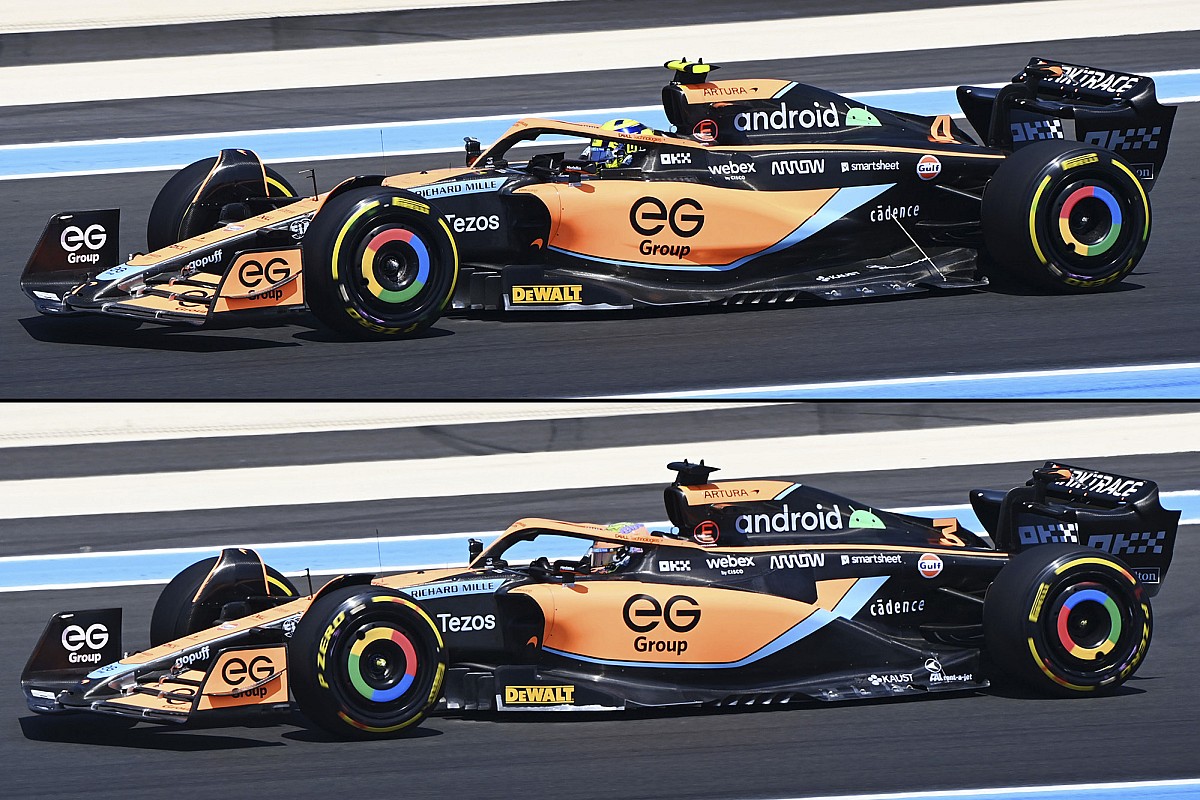 
As part of a revised package of parts introduced for the French Grand Prix, McLaren has moved much closer to the direction seen on the lead pairing of Red Bull and Ferrari.

Prior to the French Grand Prix, McLaren had been somewhere in the middle ground of teams in this area.

Aston Martin was originally at one extreme opting for the high waisted sidepod solution, whilst Williams and Mercedes had gone (initially at least) for a very short, quickly tapering arrangement.

Having seen Aston Martin and Williams already turn their backs on their respective concepts, McLaren has become the latest to do so too.

It now leaves just Mercedes to soldier on with its more compact sidepod design.

The design concept that McLaren had initially followed (top, main image) is something that teams had pursued with gusto under the previous era of regulations.

Designers had aimed to narrow the bodywork around the car’s centreline and expose as much of the top surface of the floor as possible.

This was made viable by the aerodynamic tools at the designers’ disposal when it came to managing the front tyre wake. The front wing furniture, the flow through brake duct and wheel rim designs plus the bargeboards, with their associated furniture, all helped to create outwash.

Most of these tools have been taken away from the designer’s arsenal now and, whilst teams are all still finding ways to improve their weaponry, they can’t recover all of that performance.

On top of this, the way the floor works in 2022 is very different, with much more focus on the design of the underfloor tunnels that feed the diffuser. The floor’s stiffness, the car’s ride height and its rake angle have also dramatically been altered.

This has led to the bulk of the grid opting for a more benign solution and offsetting their desire for tighter bodywork and a direct performance boost. Instead, they want a selection of surfaces that can act as a buffer to realign the wake along the flank of the car, rather than trying to displace it at the front of the floor and sidepods.

The sidepod designs utilised by the bulk of the grid therefore look to mitigate some of the issues posed by the tyre wake being shed from the front tyre by extending the sidepod’s length, and thus creating a divisional barrier to the airflow passing over the top of the sidepod.

This primarily results in a downwashing ramp being used, with the airflow invited to follow the contours into the coke bottle region at the rear of the car.

As part of this design scheme, the upper surface of the sidepod can then also be fitted with cooling gills, which returned as part of the regulatory overhaul this season and allows heat generated within the sidepod an escape route.

This can also lead to the rear cooling outlet being smaller than might be the case with other solutions, which may lead to further aerodynamic gains.

In McLaren’s case it has also opted to sneak its cooling gills up around the high waisted engine cover’s shoulder, in much the same way that we’ve seen Red Bull, Aston Martin, Haas and Ferrari do.

Alterations have also been made to the floor fences and the underfloor strake system, whilst the floor’s edge has been modified, as the team looks to better influence the wake generated by the front tyre by pushing it away from the car.

Further downstream you might note that the diffuser kickline and upwards ramp thereafter has also changed quite significantly. The floor stay is also much shorter being connected to the sidepod ramp now, rather than reaching all the way across to the engine cover.

A number of reliability fixes have arrived as part of this package too, including the rear wing endplate being trimmed following a reliability concern that had been raised in recent races.

Meanwhile, given the heat, McLaren has also introduced some optimisations in regards to the rear brake cooling, with revisions made to the internal ducting to help channel the airflow around the assembly more effectively.