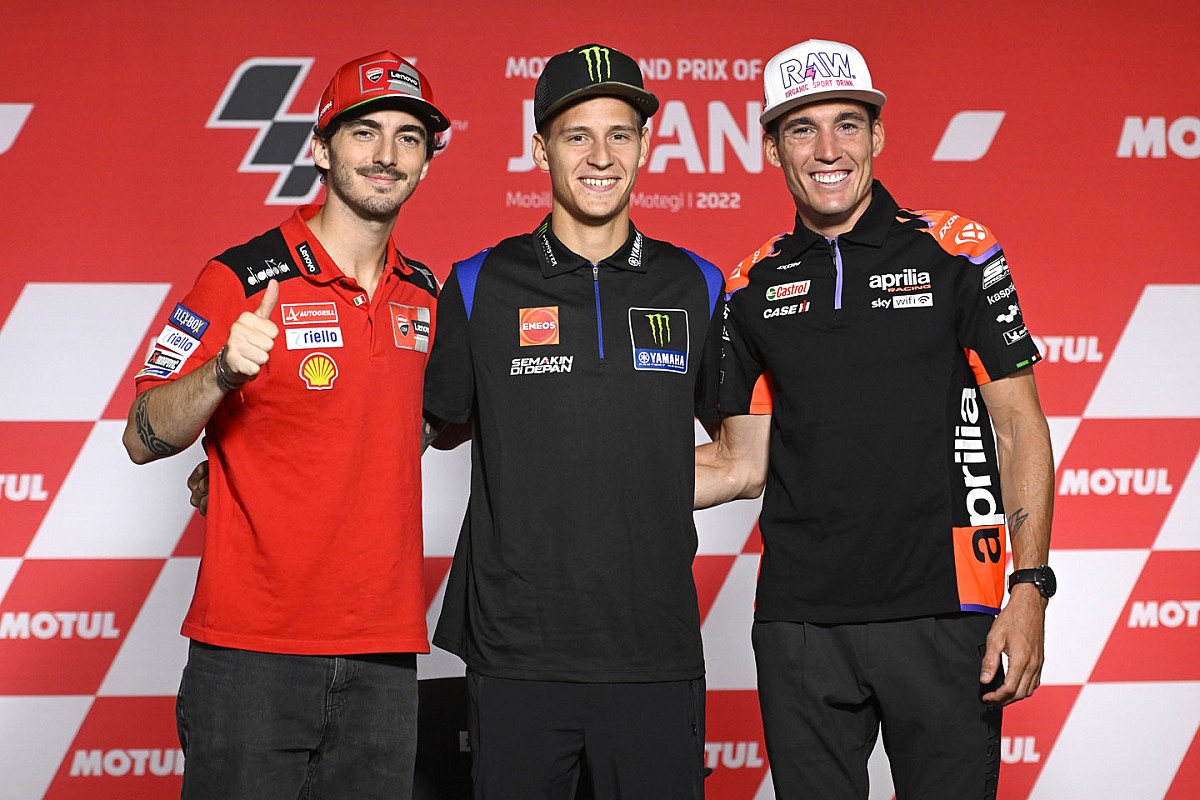 Not since the 2017 season has a MotoGP title battle gone down to the wire. In a thrilling year, Andrea Dovizioso pluckily kept his and Ducati’s outside hopes alive against Marc Marquez through to the final round in Valencia. Ultimately Marquez prevailed, and through 2018 and 2019 the Honda rider dominated.

The COVID-delayed 2020 season remained close for much of its shortened 14-round calendar. But repeated errors from Fabio Quartararo and consistency from Suzuki’s Joan Mir meant the latter won with a round to spare. And last year, Quartararo wrapped up his maiden championship with two races left to run.

Now we have three riders – Quartararo, Francesco Bagnaia and Aleix Espargaro – split by just 17 points ahead of this weekend’s Japanese Grand Prix. With just five races to go, there’s been no suggestions yet that this won’t be kept alive through to the curtain-closer in Valencia on November 6.

World championship motorcycle racing is enjoying a strong year in 2022. Three completely different challengers on three difference motorcycles are duking it out for supremacy in both MotoGP and World Superbikes.

While arguably Superbikes has enjoyed the more explosive on-track battling, and thus its title chase has become much more heated (Ducati’s Alvaro Bautista believes Kawasaki’s six-time world champion Jonathan Rea deserved to be disqualified for intentionally crashing into him at Magny-Cours), MotoGP has been the furthest thing from boring – no matter what some people like to believe.

But what’s going on in WSBK has led to talks about how the sporting drama in that title battle is detracting from the MotoGP championship race.

Maybe. Much of MotoGP’s popularity over the last two decades was built around its intense rivalries – largely centring on who Valentino Rossi didn’t like, or vice versa. Rossi vs Lorenzo vs Stoner vs Pedrosa vs Marquez was a golden era that produced some absolutely sensational battles.

And there is an argument to be made that two people who dislike each other and are driven by an ego-motivated desire to prove they are the better rider leads to great racing on track. But it also leaves the door open for hostility.

MotoGP’s epic 2015 season was soiled by the fallout from the Sepang clash between Marc Marquez and Rossi. The back-of-the-grid penalty this copped Rossi was seen as Dorna giving a Spanish rider in Lorenzo a cheat code to the title – and Rossi to this day says he will never forgive Marquez for ostensibly costing him the championship that year.

The fan backlash from this was toxic. At Mugello in 2016, both Marquez and Lorenzo had to be followed around by security personnel over fears of Rossi fans inciting violence towards them. Stories of non-Rossi fans receiving abuse and threats permeated that time – and even today the anti-Marquez brigade delight in his misfortunes.

The effects of bitter rivalries is most prevalent in Formula 1 right now. After the controversies of the 2021 Abu Dhabi Grand Prix and how it tipped the title balance in favour of Max Verstappen, F1 has descended into a hateful and toxic environment.

Williams driver Nicholas Latifi spoke of the mental toll death threats took on him over the winter, as misguided Lewis Hamilton fans believed his crash which triggered the safety car drama that decided the title warranted such abuse. At Silverstone, British crowds boo Verstappen while the same behaviour happens at the Dutchman’s strongholds – with numerous reports of assault and other forms of abuse from Verstappen fans overshadowing races too often in 2022.

When Motorsport.com ran a story from Formula 3 champion Victor Martins saying the events of Abu Dhabi went through his mind while waiting in pitlane following a red flag at Monza to understand the fate of the championship, it led to bizarre comments that 2021 had ‘traumatised’ young drivers.

To borrow a phrase from television when events become ridiculous: the shark has well and truly been jumped.

Without a doubt, some needle between MotoGP’s championship trio would create some extra spice – which, as a journalist, is good for headlines. But ultimately, our job is to reveal the stories of a season. And in Quartararo, Bagnaia and Espargaro, you have three distinct story arcs that make their quests for the championship compelling.

In Quartararo, you have the defending champion outperforming a motorcycle that simply isn’t good enough to be leading the standings right now. The Frenchman has no back-up from his fellow Yamaha riders, but has still won three times and taken crucial podiums at venues he was expected to struggle at in Mugello and the Red Bull Ring. But a dramatic crash at Aragon saw his points lead whittled down from 30 to 10.

In Bagnaia, you have a rider trying to achieve something Ducati hasn’t for 15 years. And he is doing so having been 91 points adrift after a fourth DNF of the campaign as early as June’s German GP. But six wins in total – four of which have come between Assen and Aragon – means he’s now just 10 points adrift. Not only does Bagnaia have the expectations of Ducati, but as a VR46 Academy member, he is very much seen as an heir of nine-time grand prix world champion Rossi.

And in Espargaro, you have the 32-year-old who spent much of his time in MotoGP on bikes not capable of much. Aprilia was seen as the joke of the paddock for much of the time since its return to the series back in 2015 before a major bike overhaul in 2021 began to highlight just how good a job Espargaro – someone who was publicly dismissed by Lorenzo in an online spat last year – was doing. And he has remained in championship contention throughout 2022.

All three riders have remained cordial throughout the season. When Quartararo crashed into Espargaro at Assen, the pair embraced in the Aprilia garage after the race and Espargaro noted how much the Yamaha rider is still the hero of his son.

At the end of practice in Barcelona earlier this year, Espargaro prepared for a practice start by engaging his Aprilia’s various devices. Both Quartararo and Bagnaia reached over to his bike to jokingly press buttons and put him off. Consider the storm caused by Hamilton squeezing his way past Sergio Perez’s Red Bull at the same circuit and you begin to realise this constant state of high alert in fans that a bitter rivalry causes.

“I’ve said many times, Fabio is a nice guy, and many times from outside of us from the press it looks like you guys don’t like that we are fighting for the world championship and we have a good relationship,” Espargaro said following the pair’s Assen clash. “And I don’t really understand this. We clashed already once in Assen, and I’m sure we will clash again during the next races. Racing is racing. If we know how far we can go to respect one another, this is racing. We both want to win, but Fabio is a very nice guy. He lives beside my house and always when he passes my house he stops, and I hope he can continue stopping on the next years to say hello. But what happens on track stays on track.”

Friendly, good-natured rivalries have their place in sport as much as the bitter ones. And, with only a slight change in approach, it is very easy to market.

Since the COVID pandemic forced the world to re-evaluate its priorities and what truly mattered in life there has been a shift in what resonates now. This has only been further heightened by the far-reaching effects the war in Ukraine has had on people, as a cost-of-living crisis squeezes people hard.

Over the last three years, the importance of sport as an escape was magnified – in a number of instances, getting sport back was used as a key tool in urging people to respect lockdown rules during the worst period of the pandemic.

So rich people doing things they get paid millions for, and the falling out over it, just seems very out of place in the modern world. Ultimately, whatever would have happened in Abu Dhabi last year wouldn’t have done much to completely change either Verstappen or Hamilton’s lives. They both went home to lifestyles far more comfortable than most of us will ever know.

And that much is true of whatever happens in the MotoGP title race. Yes, for athletes there are their own personal sacrifices that drive their achievements. But Mir’s sentiments when he won his MotoGP title in 2020 must always be considered: “Here, for sure we have pressure. We are playing with our lives and for sure we have to be really focused on what we have to do. But it’s our job. I think what is real pressure, that luckily I don’t have… I have good pressure, because if this year I win [it] will be super-good for me, but if I don’t win it will be also good.

Will the pressure of competition crank up on the title contenders over the final five rounds?

“But people who can’t pay their rent because of the coronavirus and all of this, these type of people who can’t bring food home, this is the real pressure. When I hear questions about pressure, I think about this and I say, ‘I don’t have pressure, this is my job, I will be super-good anyway’. I am privileged.”

There will still be controversies that could arise from the 2022 title battle. Should Bagnaia win, his drink/driving incident and lack of apparent punishment for this, as well as his bizarre tribute helmet to Dennis Rodman – a convicted abuser and ardent Kim Jong Un supporter – at Misano will have to be talked about and will shape his own championship legacy.

Hard rivalries raise the stakes, and thus create drama which is absolutely fantastic for a series at generating interest.

But we should also start learning to embrace a title battle that involves combatants who actually like and respect each other and make no secret of that fact. It makes them more human, and therefore much more relatable.