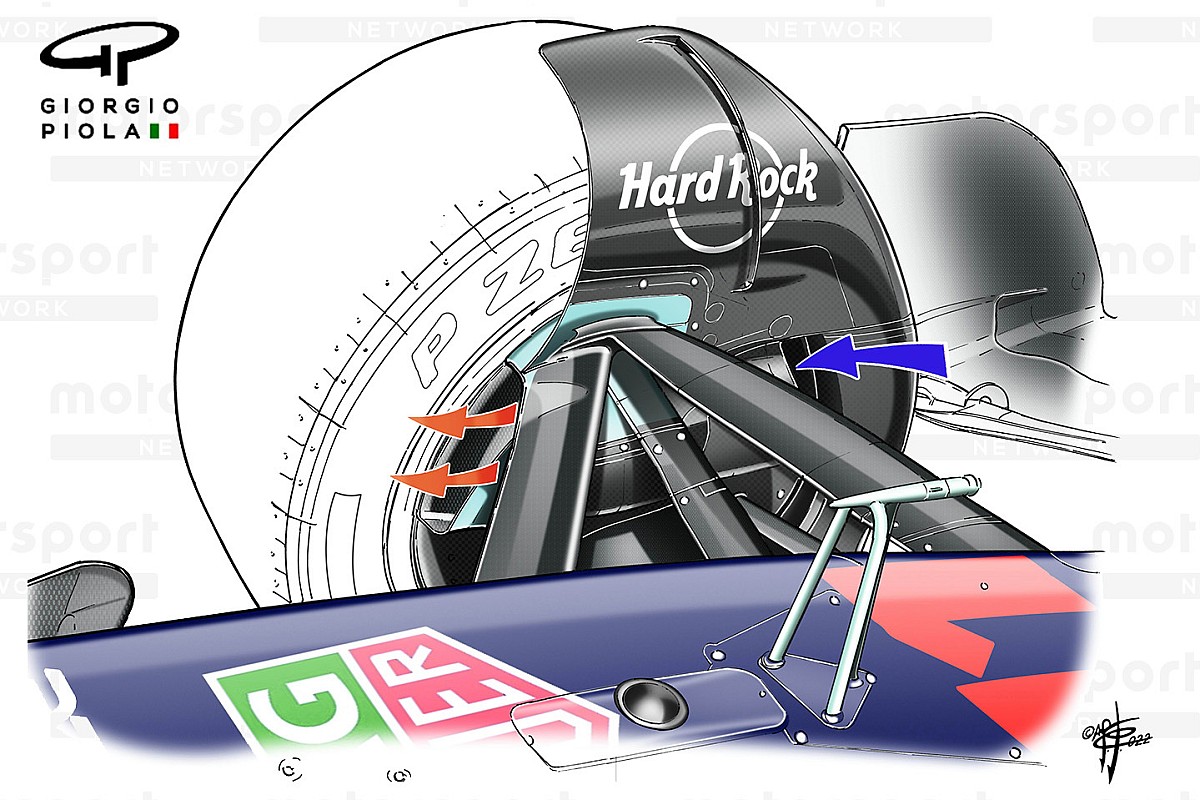 
The worries from drivers about the health implication of breathing in carbon dust during the course of a race weekend emerged after the Austrian Grand Prix when Sebastian Vettel in particular emerged from his car with a face spattered with black carbon.

Vettel said the long-running issue had worsened this season owing to the new brake duct layout, with drivers now not only subjected to the brake dust generated by a car they’re following, but also dust created by their own car.

“The design of the brake ducts this year, with the front axle, it is blowing all the brake dust into our faces and it is not good,” he said.

The regulations were changed for 2022 in regards to the design of the brake duct, in order to limit the potential for teams to generate aerodynamic outwash by blowing air out through the wheels.

As a consequence, the introduction of a mandatory rear facing duct outlet was aimed at keeping airflow centralised. However, this now appears to have triggered consequences on the carbon brake dust issue.

Under the previous regulations, teams were dumping not just airflow, but heat and brake dust directly out through the wheel face.

The freedom led to a raft of solutions that were heavily skewed towards the advantages that teams could yield from an aerodynamic perspective.

Rolling back just one year and we can see just how complex the design of the brake ducts were under the old regulations. The various solutions used by Red Bull on its RB16B goes to show how channels were used as a means of not only reducing heat transfer from the brakes to the wheel rim and subsequently the tyres, but also as a means of airflow taken in at the inlet scoop bypassing the brakes to better manage airflow as it’s dumped out the wheel face.

For comparison, we can see how Ferrari also used different solutions to leverage the different circuit characteristics to improve the temperature relationship between the brakes and tyres, whilst also managing the airflow through the assembly.

Prior to the ban of blown axles in 2019, teams utilised them as a means of bypassing the brake assembly, with airflow collected by the inlet scoop in order to improve flow conditions around the wheel rim.

F1s’s new 2022 regulations have been framed in such a way that their intent, which is to reduce the role that the brake duct assembly plays in generating outwash, is maintained.

A standard supply wheel rim and wheel rim cover is just part of this, with the outer drum creating a seal in order that airflow may only enter or exit from the front and rear scoops.

There’s still some freedom for teams to creatively interpret how to manage the heat and airflow inside the drum, with a large contingent opting to use a fairing that encloses the brake disc, as seen on the Red Bull RB18, below.

The shape, size and position of the inlet and outlet scoops are derived from the regulations, with scope for individualism amongst the competing design teams.

However, the rear scoop might be one aspect of the design that the FIA looks at in order to alter the passage of the brake dust, with the teams perhaps given too much leeway at this early stage in the regulation cycle.

It’s also worth remembering that the diameter of the brake discs has increased significantly for 2022, up from a maximum of 278mm to being required to be between 325mm and 330mm – so there is in theory more dust being material to be thrown out.

Furthermore, the diameter of the ‘drilled’ cooling holes that run through the brake disc must now have a minimum diameter of 3mm, which has a dramatic effect on the number and design of the holes being used.

The regulations now also clarify that no cooling holes are permitted in the brake pads.

The culmination of these factors means there may be times when the brake dust being generated is increased through these underlying changes in the team’s design freedoms.

Therefore, in consultation with the teams, the details of the designs of the brake discs and ducts will come under the spotlight – as the aim will be to try to find a good solution without wrecking the reasons air is not blown away from the car.

Longer terms, it’s not impossible that the FIA could even consider something more radical, like a material change for the discs.