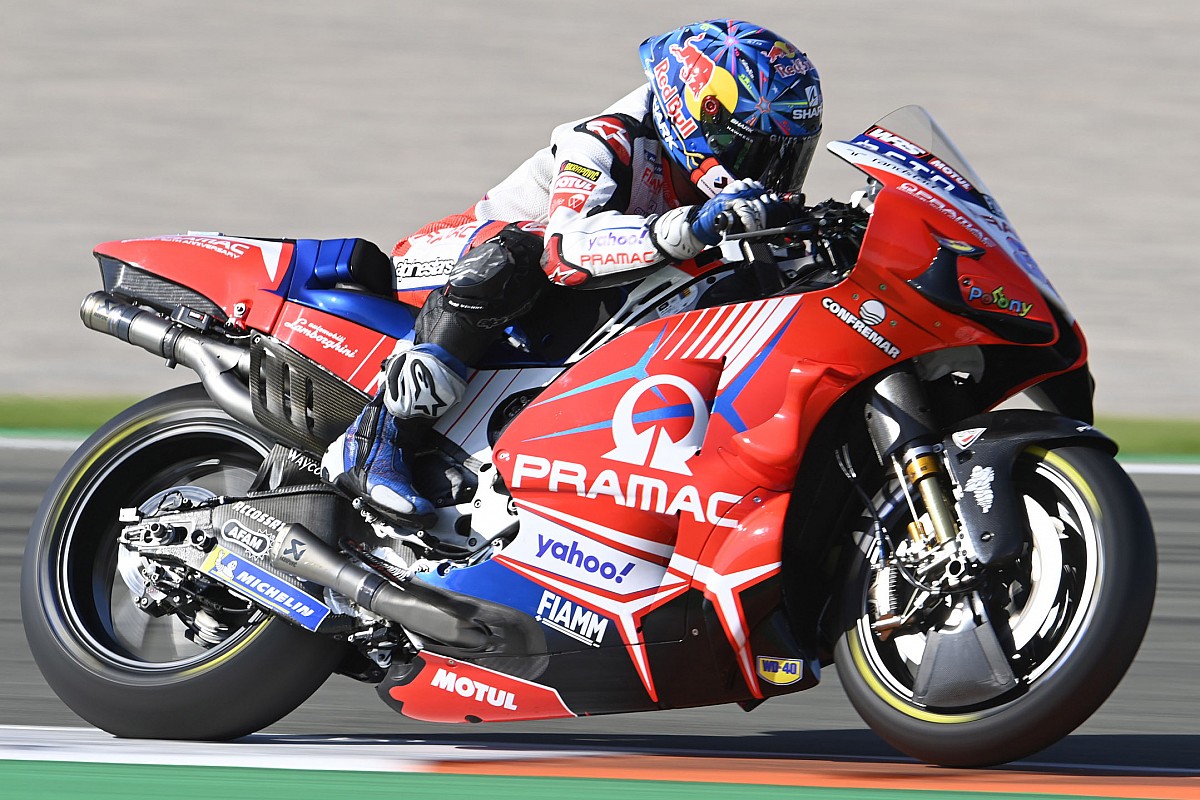 Martin began the 2021 season with a shock pole at round two in Doha, and will end his rookie campaign with a fourth pole after beating Bagnaia by 0.064 seconds in a thrilling final qualifying of the year.

The start to the Q2 pole shootout session was frenetic, with Miller blitzing the field on his factory Ducati with the best lap of the weekend at that point with a 1m30.479s.

This put him 0.585s clear of team-mate Bagnaia, with Miller improving on his following tour to a 1m30.325s.

On this occasion Bagnaia closed in to 0.015s on his following lap, but would be displaced by Pramac rookie Martin – who set an identical 1m30.325s to Miller to end his first run.

On the first lap of his second run, Bagnaia took over top spot with a 1m30.118s, improving to a 1m30.000s on the next lap to stretch a slight advantage over the rest of the field.

But Bagnaia’s session ended with around 90s remaining when he slid off his Ducati at Turn 2.

Both Miller and Martin went through the first two sectors on laps that threatened Bagnaia’s sixth-straight pole, with the latter edging clear with a 1m29.936s.

At the same time, Miller crashed at Turn 11 and could do nothing to end his pole drought in third behind Bagnaia to complete the second Ducati front row lockout of the season.

Suzuki’s Joan Mir continued his qualifying turnaround from Portugal last week by putting his GSX-RR fourth on the grid ahead of Pramac’s Johann Zarco and Mir’s team-mate Alex Rins, who topped Q1.

KTM’s Brad Binder followed Rins through into Q2 from Q1 and went on to qualify a solid seventh ahead of 2021 world champion Fabio Quartararo.

LCR’s Takaaki Nakagami was ninth on the only Honda inside the top 12, while Valentino Rossi will begin his final MotoGP race from 10th on the grid on his Petronas SRT Yamaha.

Franco Morbidelli on the factory Yamaha and Aprilia’s Aleix Espargaro completed the top 12 at the end of Q2.

Petronas SRT’s Andrea Dovizioso enjoyed his best qualifying since his return to MotoGP, missing out on a place in Q2 by just 0.071s on his two-year M1.

The 15-time MotoGP race winner will line up 13th ahead of Aprilia’s Maverick Vinales and Tech3’s Iker Lecuona on his final MotoGP appearance before his World Superbike switch in 2022 with Honda.

Alex Marquez was consigned to 19th on the grid after the LCR rider crashed at the Turn 2 left-hander late on in Q1.

Only KTM’s Miguel Oliveira – a race winner in 2021 at Barcelona – was slower than Marquez, the Portuguese rider’s qualifying form remaining bafflingly absent for the last round of the campaign.

Honda’s Pol Espargaro will line up last if he does take the start on Sunday, having sat out qualifying following a violent crash in FP3 which required him to go to hospital for checks – though no serious injuries were detected.