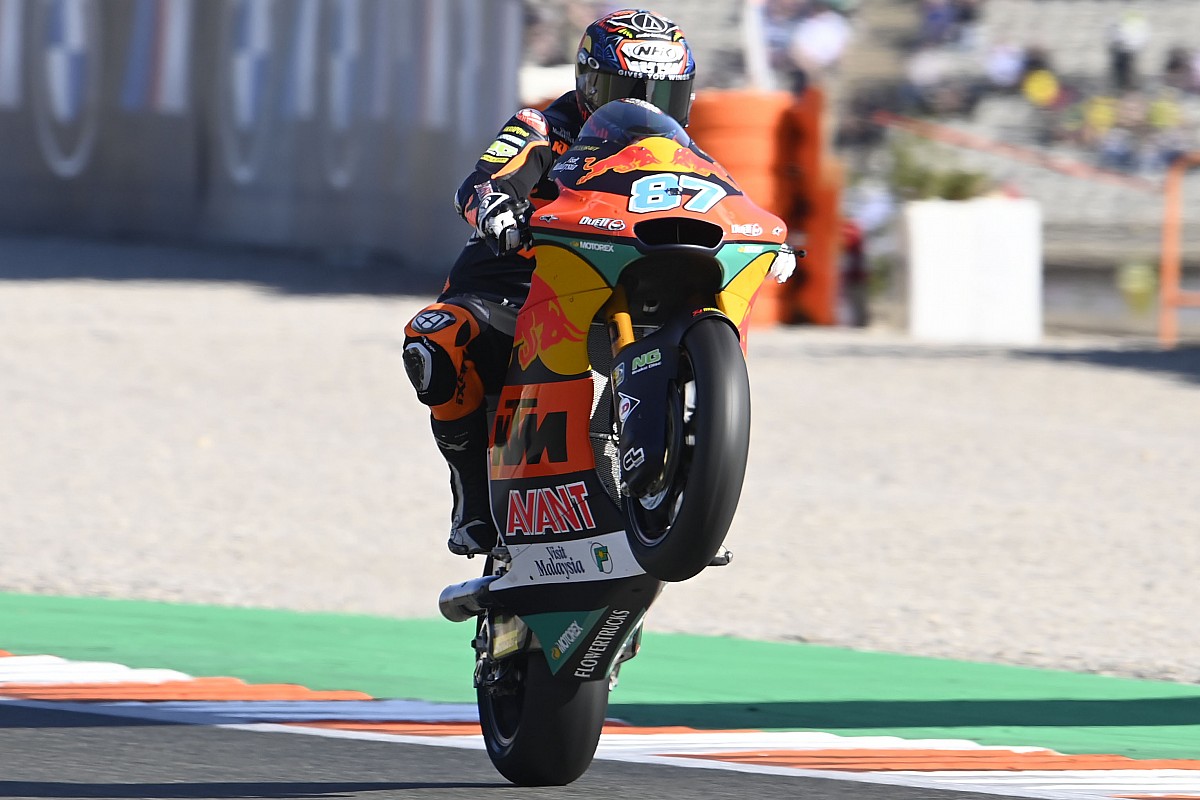 Fernandez had to win Sunday’s race to have any hope of winning the title having come into the final round 23 points behind Gardner, who in turn simply needed to finish 13th or higher to seal the deal.

The race was red-flagged on the opening lap after oil was dropped at Turn 3 following a crash involving VR46’s Marco Bezzecchi, Xavi Vierge (Petronas Sprinta) and MV Agusta’s Lorenzo Baldassarri.

Poleman Simone Corsi had taken the lead from Raul Fernandez, while his Ajo KTM teammate and chief title rival Gardner had dropped to 15th.

The race was shortened to 16 laps from 25 for the restart, but Corsi’s first pole in nine years would come to nothing as he was forced to pull out on the warm-up lap with a technical issue on his MV Agusta.

Off the line Augusto Fernandez took the lead on his Marc VDS Kalex followed by Raul Fernandez and Gresini’s Fabio Di Giannantonio.

Raul Fernandez took the lead at Turn 6 on the second lap for the first time, while Gardner circulated in ninth and doing enough to win the championship.

The two Fernandezs engaged on laps three for the lead, with Raul losing out to both Augusto Fernandez and Di Giannantonio on the following tour.

Di Giannantonio would lead from lap four through to the 13th tour, when Raul Fernandez came through into Turn 2.

But Gardner continued to do what he needed to secure the championship as he ran in a safe 10th on the second of the Ajo KTM machines.

Fernandez had pulled out a gap of almost four tenths as he began the final lap in the lead and would take the chequered flag for the eighth and last win of his Moto2 career before he steps up to MotoGP next year.

But it was all futile, as Gardner crossed the line in 10th to become the 2021 Moto2 world champion and join his 1987 500cc title-winning father Wayne Gardner as just the second father/son pairing to win grand prix championships in any class.

Di Giannantonio held off Augusto Fernandez to take second ahead of his step up to MotoGP alongside Raul Fernandez and Gardner in 2022.

Celestino Vietti ended his rookie Moto2 campaign with a strong run to fourth on the VR46 Kalex ahead of Aspar’s Aron Canet and World Superbike-bound Xavi Vierge on the Petronas Sprinta Kalex.