The WRC three-peat that crowned McRae the Acropolis master 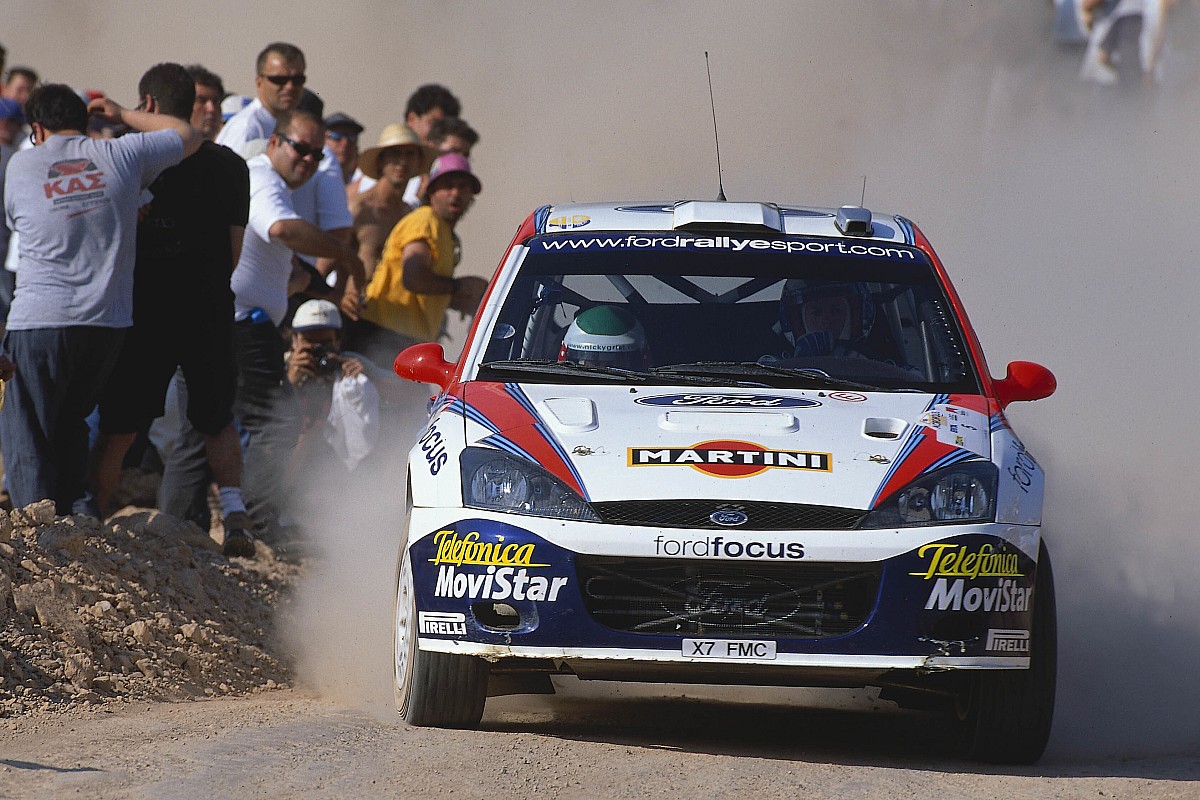 Sebastiens Loeb and Ogier have re-written most of the World Rally Championship’s record book over the last 20 years. But when it comes to the Acropolis Rally the pair remain in the dust trail of Colin McRae, who remains the Acropolis master.

Twenty years ago, the 1995 world champion conquered Europe’s toughest and most gruelling rally for a record fifth time in seven years to firmly stamp his authority on Greece’s punishing rock-ladened mountain gravel roads. Few can hold a candle to McRae in Greece, the Scot scoring wins for Subaru in 1996 (in somewhat fortunate fashion, as he had to effect repairs to his propshaft before the final stage in a specially convened service that hadn’t been on the original schedule) and once more in 1998, before claiming a hat-trick for Ford that culminated in his 2002 success.

That victory drew him level with Carlos Sainz and Tommi Makinen on 24 career WRC wins, atop of the all-time winners list, but would also mark McRae’s penultimate triumph of his top flight rally career.

Due to McRae’s untimely death in 2007, we will perhaps never truly understand why the exponent of maximum attack gelled so well with one of the toughest events on the WRC calendar. And the Acropolis wasn’t a one-off in that respect either, for McRae also won three times on the no less difficult Safari Rally in 1997, 1999 and 2002 – the last coming straight after his record-extending Acropolis success. It was on the Greek stages that McRae scored more wins than any other rally on the WRC calendar, a feat the man himself struggled to explain.

“I don’t know it is just one of these things,” said McRae, when asked in 2002 why he was so dominant there. “It is a rally we have got right, there is no real reason why it is just going our way.”

The hot Mediterranean climes marked the halfway point of a 2002 season that had hitherto been dominated by Peugeot. The French marque’s 206 had won four of the first six rallies, with two wins apiece for 2000 world champion Marcus Gronholm and tarmac ace Gilles Panizzi.

In fact, Peugeot should have added a fifth win in Argentina, the round prior to Greece. Gronholm had pressured Subaru’s Makinen – the victor on the Monte Carlo Rally following a penalty for young upstart Loeb – into a mistake on the final stage to collect what should have been a 1-2 ahead of Peugeot’s new signing Richard Burns. But the pair were both disqualified after the finish – Gronholm after mechanics breached rules to help him start his 206 outside of service, while Burns’ flywheel was found to be 20 grams too light – and Sainz handed the honours.

His Ford teammate McRae, who had challenged Burns so strongly for the 2001 title, headed to Greece languishing seventh in the championship and facing the prospect of a victory drought spanning more than 12 months. With a 21-point deficit to Gronholm, the pressure was on McRae to re-ignite his form and championship prospects, which had been dented two months earlier in Cyprus when a win appeared on the cards before he’d crashed twice on the final day, handing victory to his Finnish rival.

“We need points out of the next two rallies,” said McRae ahead of the event. “It would be nice if people had problems, so we could be right back up there, but we certainly need to score good points here.”

Despite the pressure, McRae delivered exactly what was required as John McIlroy summed up perfectly in Autosport, now a sister title to Motorsport.com: “Colin McRae has had more dramatic victories than the one he and co-driver Nicky Grist enjoyed on last weekend’s Acropolis Rally, but he can scarcely have had one more timely.

Whether it helped or not, the Blue Oval’s cars did receive some divine intervention as a priest blessed the machines before the rally began…

“He put in a polished, professional performance. A combination of a good road position on the first day and the brute strength of his Ford Focus WRC thereafter did the rest.”

The key to the victory was indeed down to McRae’s natural ability in rough rallies of attrition, plus the strength and speed of the M-Sport-built Ford Focus WRC 02. Whether it helped or not, the Blue Oval’s cars did receive some divine intervention as a priest blessed the machines before the rally began…

The threat posed by the robust-yet-fast Fords was first showcased by McRae’s young Ford teammate Markko Martin, who aided by a strong road position on the hot and dusty stages stormed into an early lead. The Estonian blitzed the day’s six stages to end the opening leg armed with a 50.7s advantage over Hyundai’s Freddy Loix.

Loix and Hyundai teammate Armin Schwartz also benefitted from the cleaner road conditions, although the latter was delayed by a water pump issue that cost the German 20 seconds after being two minutes late out of service. This, in addition to McRae posting second-fastest stage times on the final two tests of the day, elevated him from sixth to third overall – albeit 53.0s behind Martin.

“We’ll push tomorrow but Markko has got a good lead and has been driving well,” said McRae.

While drivers felt the roads were smoother than previous iterations, the Acropolis still packed a punch. Subaru’s Petter Solberg lost more than a minute to a spin on the opening stage, his delay resulting in McRae catching the Norwegian and being distracted in his dust. Gronholm had held third after Stage 3, but his rally began to unravel after spinning his 206 on Stage 4 and dropping to 10th overall. Solberg’s teammate Makinen retired altogether after a rock ripped his front-right wheel from the car.

At the front, Martin continued his searing pace on Saturday morning as the top 15 road order was reversed. Facing almost a minute to make up on his teammate, even McRae admitted his hopes of a third successive victory were unlikely.

However, on Stage 9, Acropolis dealt a hammer blow to Martin’s hopes of a maiden victory. The rough gravel road had caught out the Ford driver as razor-sharp rocks punctured his front right tyre, costing him the lead and more than two minutes. He dropped outside the top 10.

“Basically we got a puncture just like that, without hitting anything,” reported Martin. “It was so bad we had to stop and change it, as otherwise we would have broken the suspension and there is a long way to go.”

McRae added: “Unfortunately, Markko had a puncture which could have happened to anyone as the stage conditions were pretty bad. All you can do is go as quick as you can and hope you don’t pick up a puncture.”

McRae would avoid trouble across the day’s remaining two stages following the cancellation of Stage 10, due to excessive crowds, to lead Burns by 32.6s to set up a battle of the Brits for a final day, four stage showdown. McRae wasn’t convinced his lead would be enough to secure him the win.

“No not all,” McRae said, when asked if the lead was sufficient. “If we have no problems, then judging by the pace we had today then it could be okay. I’m sure Richard and Marcus are going to push very hard tomorrow. It is so easy to have a problem or a puncture, so it is not comfortable.”

Burns became McRae’s closest challenger, but the Peugeot man was forced out by a suspension problem

Burns admitted it was going to be “tough” to overhaul McRae, but promised he would be “pushing to try and make an impression” as he sought a first win for Peugeot on Sunday. After steadily making a recovery from his earlier spin, third-placed Gronholm wasn’t out of the running either, sitting 42.3s in arrears. The Finn was comfortably ahead of Sainz, who had battled a gearbox issue with his Focus, and Loix, while Peugeot’s Harri Rovanpera held sixth.

Meanwhile Solberg’s eventful rally had continued as he shot from outside the top 20 to seventh – despite one of the most bizarre moments in WRC history on Stage 8 when his Subaru’s steering wheel came loose. It prompted co-driver Phil Mills to abandon calling pacenotes for some six kilometres and dive for the tool kit to attempt to tighten the steering wheel, while Solberg continued to drive. Incredibly, Solberg was able to set the second-fastest stage time in the process.

“What happened with the steering wheel was crazy,” Solberg told Motorsport.com last year. “Phil is a serious co-driver and I pushed him twice to get the tools that were behind his seat on the floor. We laugh about it now, but for safety point of view it was not good. He picked up the tools and tightened the wheel and I finished second-fastest on the stage – which was incredible!”

“When you consider that we have now won this event for the last three years, it shows that it’s a solid package. We haven’t had a single major mechanical problem this weekend” Colin McRae

In true McRae style, the path to victory was not plain sailing. Drama unfolded on a final day that began with Burns’ dramatic exit from the victory fight with broken rear suspension that forced him to pull up on the side of the road. That had seemingly handed McRae an easy win, but shortly after passing Burns’ stricken 206 he almost threw away the rally after mishearing a pace note.

His Focus slid into a tree on the exit of a tight left-hander and, while the tree actually helped bounce him back onto the road, it did inflict some damage to the left-rear corner. It necessitated a frantic McRae and Grist to take a sledgehammer to the car’s wheel arch and kick the arch from inside to pull the metal away from cutting the tyre.

The roadside repair worked wonders, allowing McRae to effectively cruise to a drought-ending and WRC all-time record-equalling victory, 24.5s ahead of Gronholm. Sainz completed the podium ahead of Rovanpera, Solberg, Martin and a future three-time Acropolis winner Loeb, competing in his first top-flight WRC Acropolis entry for Citroen.

“It’s great to get a win – I hope it doesn’t take as long to get the next one,” McRae said. “The key to the success here has been the strength of the car. When you consider that we have now won this event for the last three years, it shows that it’s a solid package. We haven’t had a single major mechanical problem this weekend and hopefully that will continue for us in Kenya.

“The [win] record is a nice extra but we really need a win here to break the Peugeot stranglehold and give us any chance of the title and we’ve done it. We will be aiming for the same in Kenya.”

The win was not lost on M-Sport Ford boss Malcolm Wilson, who added: “Twelve months is a long time guys, I hope I don’t have to wait 12 months for the next one! Let’s hope it is the kick start to your championship.”

The triumph did indeed kickstart McRae’s title bid, as victory followed at the next round in Kenya. His 25th and final career WRC win also saw McRae briefly move clear of Sainz and Makinen to hold the all-time wins record on his own.

But McRae’s African success was followed by three retirements from the next six rallies as his final season at Ford ended on a disappointing note. He split with Grist before the year was out, reuniting with his 1995 title-winning co-driver Derek Ringer for the final two rallies, before the pair moved together to Citroen for 2003.

As for the WRC all-time wins record, that today now stands at staggering 80 wins, courtesy of nine-time world champion Loeb, who returns to the Acropolis in search of a fourth win in Greece this weekend.