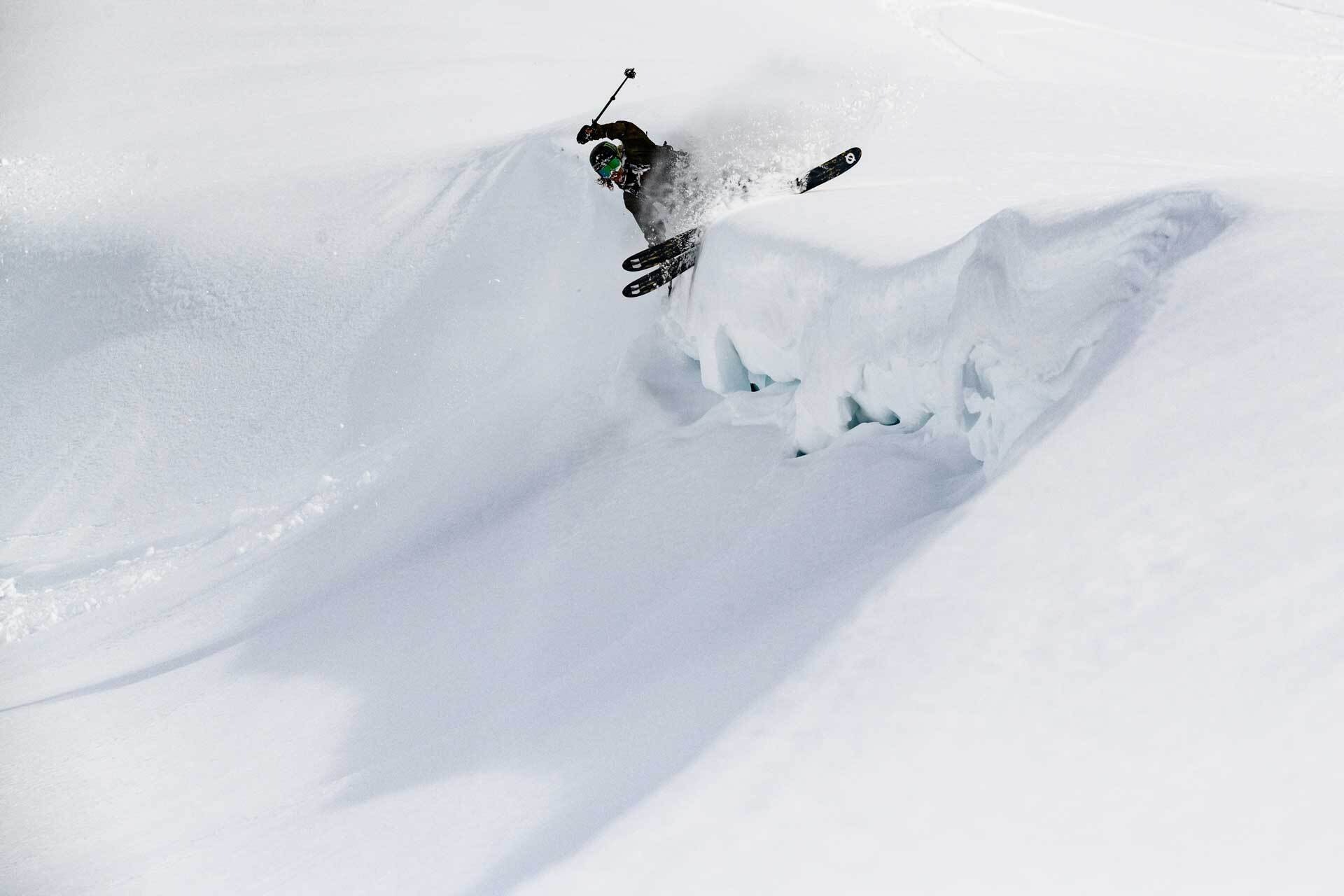 
The term ‘surfy’ has quickly become the buzzword in ski media. Skis aspire to create a surfy, slarvy and slashable feeling similar to how our snowboard pals have brought the playful riding experience to their decks.

In the world of skis, the first loose and surfy planks came in the form of McConkey’s iconic Volant Spatulas – powder skis that brought in rocker, taken from banana-shaped water skis, to produce a pair of skis that remained super-loose for effortless slashes.

Since McConkey, there have been many athletes who have become trendsetters in both ski design and a mastery in the sideways-slashing surfy style. Eric Pollard with the Sakana and Chris Benchetler with the Bentchetler series brought powder skiing to the masses while, in most recent years, Sammy Carlson has quickly shot to the forefront of this surfy skiing style.

Sammy’s unique style was born from hanging out with the Poor Boyz up on Mount Hood, while his strong freestyle background gives him one of the most clean and flowy styles that’s hard to match. We caught up with Sammy to hear from him how this style was born, and see how his equipment – including the new Surf the Mountain range by Quiksilver – has helped to influence that iconic surfy style.

Hey what’s up Sammy? Hope all’s good! I just wanted to dive into your background a bit. You obviously fine-tuned your skiing up at Mount Hood. How much of your style is down to that mountain and the Poor Boyz crew?

Yeah, definitely. I feel very fortunate to have grown up in Mount Hood and spend so much time with the local crew and yeah, it was all about style. Eric Pollard was like a ski hero for me, someone I was looking up to as a kid, for sure. So as I started progressing, I was really psyched on doing big spins and tricks, but I really wanted to add an element of style to it.

You’ve obviously got a solid big air and slopestyle background, but I was interested to hear if it was quite a natural progression for you to go from that background to, you know, super surfy, super playful backcountry terrain?

Definitely, yeah. For me, just growing up in Mount Hood, it was always about skiing the entire mountain. I really enjoyed going to the park, but whenever we got good snow, I’d be skiing the whole mountain with buddies and hitting cliffs and airs. So I always had that passion for just free riding outside of the park. And then as I grew older and got connected with Poor Boyz productions, then TGR, so I always had the opportunity to go out into the big mountains.

As soon as the X Games was over, I would always go up to Whistler and spend a lot of time in Canada with some buddies up there and just yeah, really loved and always enjoyed the backcountry.

I wanted to spend a majority of my time out filming [in the backcountry] and I was always like, if I was out of the mountains or just at home, I found myself daydreaming more about riding lines and just shredding pow more than competitions.

So, all of a sudden, leaving the mountains in the backcountry to go and do some of these competitions kind of started feeling like it was forced, and I just didn’t like what it was doing to my overall passion for the sport. So I just decided to just focus on what was actually inspiring me, instead of trying to pretend like I was still super psyched on competing, because I had a lot of fun when I was doing that.