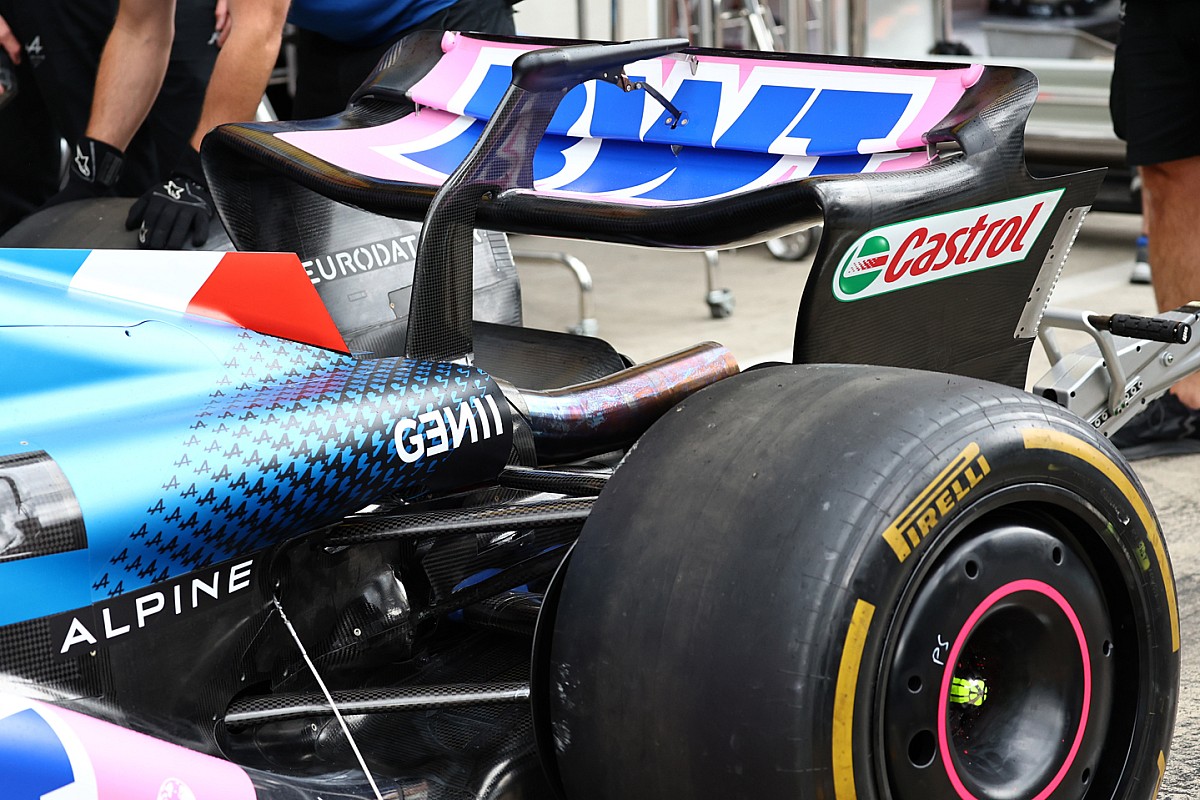 
The form has come as the result of a pretty intensive development push this season that has helped Fernando Alonso and Esteban Ocon keep bringing home the points – and even the occasional real stand out performance.

Ocon’s top five finish in Austria, and Alonso’s charge from the back of the grid that could have netted him sixth, is proof of the potential in the A522, and has lifted optimism for the next races.

The pace at the Red Bull Ring was helped by a new rear wing, which has built on the selection of four different downforce options it has already run so far this season.

This new design seemingly sits between the medium and high downforce offerings it has already used.

The fact that Alpine has chosen yet another iteration is perhaps indicative of the solid gains it has made, especially when the different versions as twinned with the beam wing.

Whereas previously Alpine had favoured a flatter mainplane design, it opted for a deeper central section and shallower outer portion (upper of the two in the image below).

This has also resulted in the modification of the outer section of the upper flap and endplate transition, with the cutout altered quite considerably as a consequence (see yellow line to compare).

Alpine has also joined Alfa Romeo in the use of a teardrop-shaped DRS pivot (circled), which like its rival also has a section of the pivot mounted on the flap side, meaning there’s a shut line that runs through it.

Back to back push

Alpine had a significant upgrade package available for the previous race at Silverstone, the centrepiece of which was a redesign of its sidepod bodywork.

At the front of the sidepod, the undercut has been increased, as the team wrap the bodywork even tighter than before.

The upper bodywork of the sidepod has taken on the bathtub-like crevice in the upper surface that Ferrari has employed with the F1-75 since the start of the season.

Where Alpine has built in a little more versatility is in regards to the cooling gills, as seen when comparing its setup at the last two races.

At Silverstone it utilised gills that followed the contours of the upper surface of the sidepod crevice, whereas at the Red Bull Ring these were absent. The panel, on the now higher rounded shoulder above, has more apertures with which to reject the heat created within.

Red Bull also arrived in Austria with several new items that it hoped would improve the car’s operating envelope.

This comes off the back of the team having already made a significant change to the layout of the RB18’s bodywork at Silverstone.

That was mainly focused around a new engine cover that creates a shelf and alters the airflow’s behaviour as it passes over it, toward the cooling outlet and below it into the coke bottle region.

For Austria, the team made a change to the engine cover’s spine, removing a section of the bodywork in order to help reject heat being generated within.

It’s a solution that’s by no means a new design though, as teams such as Alpine and Haas already have similar designs, suggesting Red Bull may have been inspired by its rivals.

The team also made a revision to the innermost floor fence, taking away some of the material in the lower portion in order to improve performance over a range of ride heights.

There was also a change to its front brake disc fairing, which is another in a long line of optimisations that the team has made to this component already this season.

The fairing, which isolates the brake disc from the large volume of the inner brake drum, has an impact on the airflow and the heat being rejected and so the team is eager to keep them both in check.

Limitations imposed by 2022’s regulations mean that the airflow passing through the assembly must now be passed out a rear facing outlet mounted on the inside of the brake duct’s fence.

This was implemented in order to prevent teams from dumping airflow out through the wheel face and undo the work done to reduce the amount of ‘outwash’ that the teams are able to generate, and which was a significant development focus for them in the previous regulatory era.

Tracking the progress made by the team from left-to-right, below, the team has not only revised the shape of the fairing throughout this period, but also removed the necessity for additional insulation.

In order to accomplish this, a heat resistant coating has been implemented, with a surface treatment applied to both the disc fairing and the caliper.

To add further assistance in terms of heat management, and the passage of airflow around the disc, the fairing’s shape was modified once more for Austria, with the upper corner expanded (red arrow).

Another interesting development that appeared at the British Grand Prix and will likely be studied by its rivals was found on the Aston Martin AMR22.

As part of a quite extensive upgrade at its home race, the team added a collection of small winglets to the inner fence of the rear brake duct.

These winglets will alter the course of the airflow as it’s collected between the fence and the sidewall of the tyre, whilst also adding a nominal local load of their own.