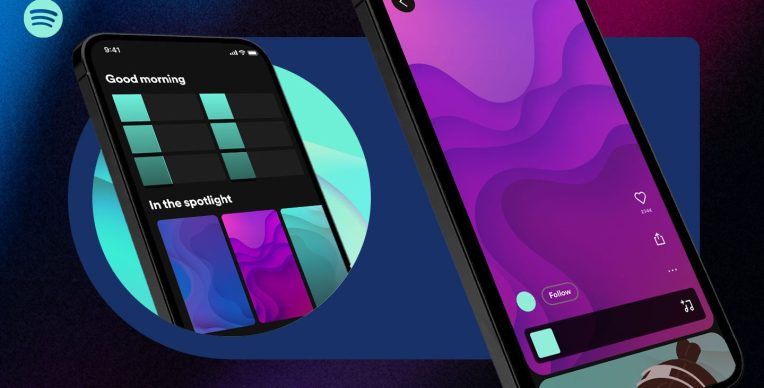 
Spotify is experimenting with yet another new discovery feature, following last week’s test of an “audio news feed” for podcasts.

Now, the streaming service is testing a personalized feed on the app’s home screen, which introduces users to new music through a feed of canvas loops (AKA, those GIFs that appear when you’re listening to certain songs — Olivia Rodrigo’s “Brutal” is accompanied by loop of a cake being smashed, for example).

Like TikTok, these songs and accompanying canvas loops will be presented in a vertical video feed, which Spotify was first spotted testing in November (you can even buy houses now in a short form, vertical video feed — are we okay?). Every day, this feed — which is testing in the UK, Ireland, Australia, New Zealand and Canada — will recommend 15 songs. If you see a track you like on this feed, you can add the song to a playlist, follow the artist or share it to your social channels.

When Spotify launched canvas in 2019, initial reactions were mixed, but the company continued pushing the feature, even opening a marketplace for artists to sell musicians looping illustrations. At the time, Spotify claimed that users were 145% more likely to share tracks that included a canvas loop. Now that canvas loops are continuing to be pushed front and center on the app, this probably means for musicians that if you want a better chance of being promoted by Spotify, you might want to make a GIF.