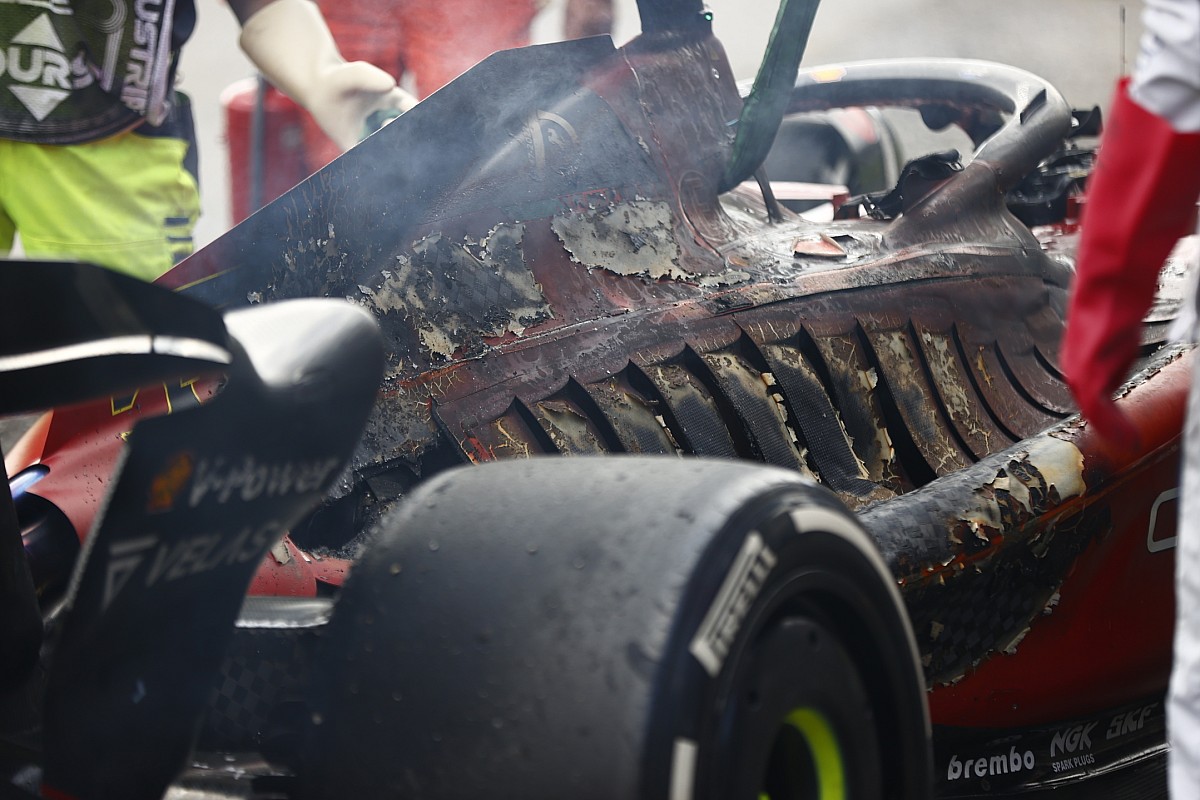 
Sainz was about to challenge Max Verstappen for second place when his engine went up in a puff of smoke on lap 56 of 71, and the Spaniard immediately pulled over at Turn 4.

The back of his Ferrari F1-75 was quickly engulfed in flames as Sainz was frantically waving at the marshals to attend to him.

But while he was keen to get out of his burning car, Turn 4’s dramatic slope meant the car started rolling backwards as soon as he took his foot off the brakes. Only after a marshal threw a chock behind his front right wheel could Sainz climb out safely.

Sainz said that he was initially reluctant to jump out and leave his Ferrari rolling down the hill out of control, but at some point the fire became so intense that he had no choice but to bail out.

“Yeah, it was not an ideal and an easy situation for sure, because I saw in my mirrors that the car was catching fire. But at the same time, I was pressing the brake.

“And as soon as I tried to jump out, I saw that the car was running backwards, and I didn’t want to leave the car completely free out of control rolling backwards while jumping out.

“I was calling the marshals to come and help me, to put something on the tyres to stop the car rolling down but I think the whole process was a bit slow.

“And at some point, there was so much fire that I had to really get a move on and jump out independently. I think it was just at that time that the first marshal arrived and stopped the car.”

Carlos Sainz, Ferrari, walks away from his car after a fire

The sluggish response from the corner marshals drew criticism from observers, especially from members of the IndyCar paddock whose AMR safety team is known for its incredibly rapid arrival at the scene of an incident.

Penske driver Scott McLaughlin, the winner of IndyCar’s most recent race at Mid-Ohio, tweeted it was “crazy how long that took for people to help Carlos Sainz there, thank you to the IndyCar safety [team].”

Sainz agreed that the FIA should look into what can be done to speed up the safety response in similar incidents.

“Yeah, it’s definitely something we want to look at; what we could have done a bit faster, because it was not the easiest situation to be in.”

At the time Sainz had a sizeable pace and tyre advantage over Verstappen, meaning he would have likely finished second behind teammate Charles Leclerc.

Sainz admitted he was “lost for words” after the latest round of Ferrari reliability woes in 2022, one week on from taking his maiden win in Silverstone.

I Went To Chamonix To Learn The Mountain Ways