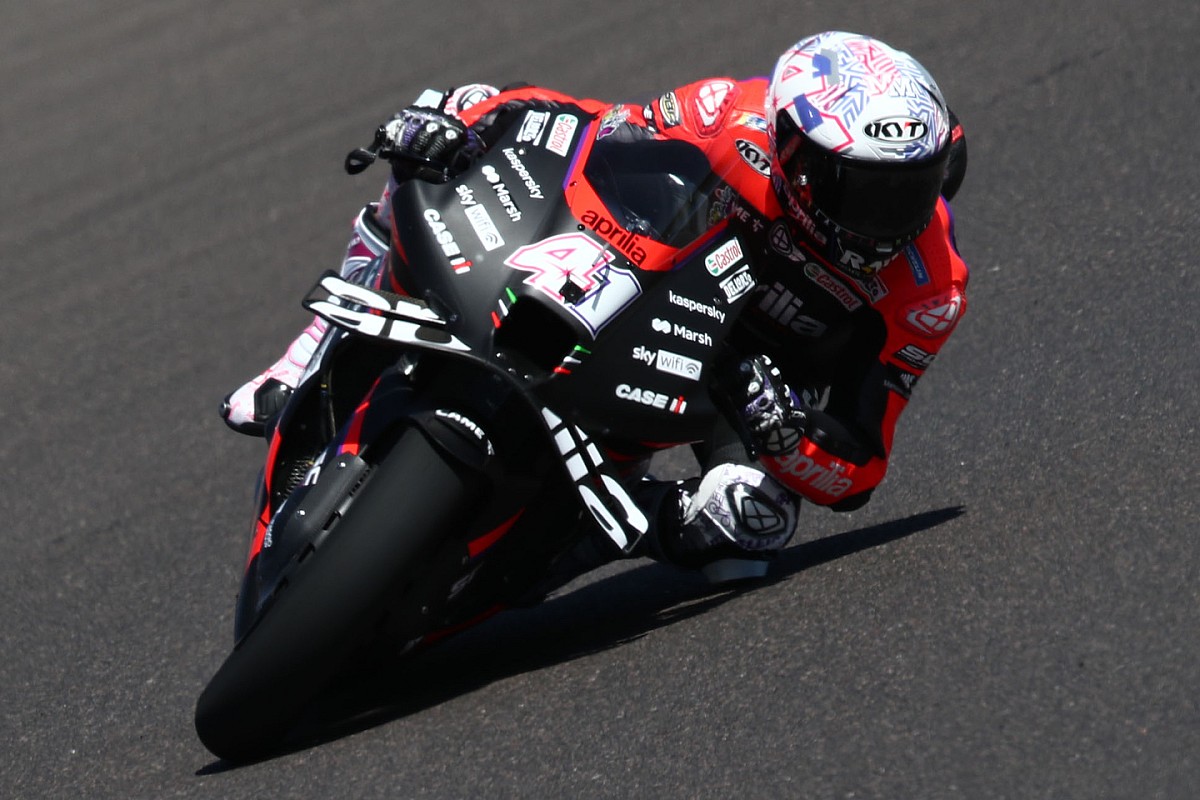 
Having topped practice outright on the revised Saturday schedule forced upon MotoGP by freight delays in Argentina, Espargaro carried that form into Q2 to score his first pole since he was a Suzuki rider in 2015 at Barcelona.

Maverick Vinales set the early benchmark on the first of the Aprilias at 1m38.880s, but team-mate Espargaro was lighting up the timing screens on his first flying lap.

Espargaro hooked the lap together to produce a 1m38.108s to go fastest of all ahead of Pramac’s Jorge Martin and world champion Fabio Quartararo on the only Yamaha in Q2.

Just as Espargaro shot to the top of the order, Jack Miller added to an already difficult day for the factory Ducati squad when he crashed at Turn 1 with just under five minutes of the session gone and wrecked one of his GP22s.

Before he’d even taken to the Rio Hondo circuit, Joan Mir was dealt a setback when his number one Suzuki encountered a technical issue as he was about to leave his garage.

Forced to head out on his second bike, Mir was only seventh after his first run as team-mate Alex Rins sat in fifth.

With just over a minute remaining, Pramac’s Jorge Martin dipped underneath the 1m38s for the first time this weekend with a 1m37.889s to take over provisional pole.

But Espargaro monstered the end to his final flying lap to produce a 1m37.668s to claim Aprilia’s first pole of the modern four-stroke MotoGP era.

Martin held onto second, while MotoGP legend Valentino Rossi’s brother Marini gave VR46 its first front row in the premier class when he shot to third late on – the Italian only taking delivery of his Ducati at the early hours of Saturday morning having been badly affected by the freight delays.

Pol Espargaro came through Q1 to put his factory Honda into fourth ahead of Vinales and Quartararo – who was left enraged when he got baulked by Ducati’s Miller at Turn 7 late on.

The incident has been put under investigation by Race Direction, with Miller only 11th in Q2 behind Takaaki Nakagami – who also came through Q1 on his LCR Honda – Pramac’s Johann Zarco and Suzuki duo Mir and Rins.

KTM’s Brad Binder rounded out the top 12 after making a mistake on his final lap having been on course to challenge for pole.

The big shock of qualifying came in Ducati’s Francesco Bagnaia failing to exit Q1 having dropped into it in a frustrating FP2 session.

Abandoning his first run after getting out of shape on a vicious bump through the fast Turn 12 left-hander, Bagnaia was left in last in the session.

And though he did manage to go fastest at the start of his second run, he found himself shuffled down to 14th with a 1m38.610s and could do nothing to better this.

Championship leader Enea Bastianini also failed to make it out of Q1 and will start ahead of Bagnaia aboard his Gresini-run 2021-spec Ducati having missed the Q2 cut by 0.043s.

Yamaha’s Franco Morbidelli was 15th, with Indonesian GP winner Miguel Oliveira struggling in Q1 to a lowly 16the ahead of VR46 rookie Marco Bezzecchi.

Andrea Dovizioso will start 19th on his RNF Racing Yamaha ahead of Alex Marquez on the LCR Honda and Gresini’s Fabio Di Giannantonio.