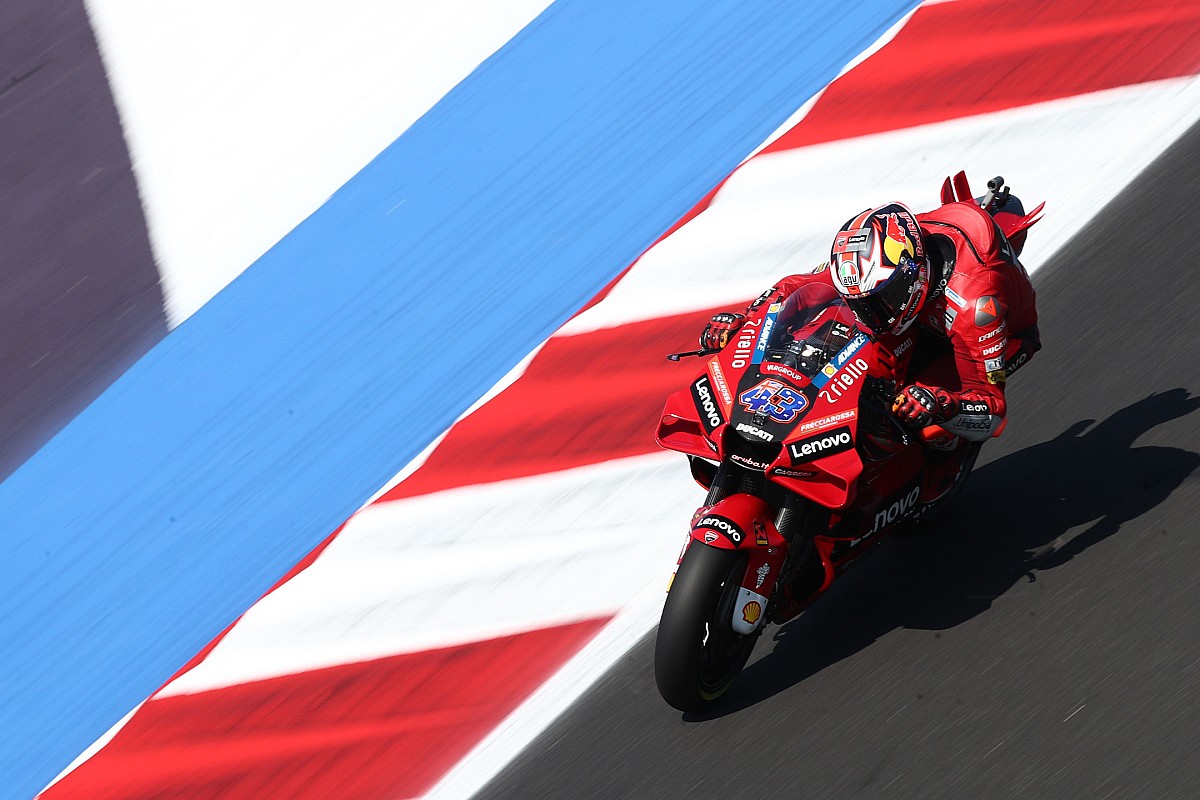 Gloomy but dry conditions greeted the field as the final timed practice of the weekend got underway at Misano.

Though dry, conditions weren’t optimal for time attack laps, with three riders inside the top 10 on combined times failing to improve on their Friday best efforts.

After 15 minutes of running, only 15th-placed Fabio Di Giannantonio on the Gresini Ducati and Ducati test rider Michele Pirro in 18th had made any lap time gains.

It wouldn’t be until the final 12 minutes when the first significant change in the order came, as reigning world champion Fabio Quartararo guided his Yamaha to third with a 1m31.644s.

Just as he did this, though, spots of rain began to fall in the final sector, which prompted a flurry of activity as the field made their bids for a direct spot in Q2.

Top honours would go to Ducati’s Miller, who went top with a 1m31.296s with just under nine minutes of the 45-minute session remaining.

Teammate Bagnaia would pressure that lap time, but would ultimately come up short by just 0.071 seconds to end FP3 second overall.

Enea Bastianini failed to improve on his Friday best, but remained third overall with a 1m31.517s on his Gresini Ducati as Aprilia’s Maverick Vinales made a late jump up to fourth.

However, Vinales had his best lap cancelled for a yellow flag infringement for several crashes late on in the session, dropping him to seventh overall.

This promoted Quartararo up to fourth ahead of Suzuki’s Alex Rins, who shadowed Bagnaia on his late flying laps to safely get into Q2.

Johann Zarco was sixth on his Pramac Ducati as teammate Jorge Martin was dumped into Q1 after his best lap was deleted for a yellow flag infringement.

Dropping to 15th, Martin will face Q1 in qualifying later this afternoon.

Aleix Espargaro didn’t find any lap time gains in FP3 but remained in Q2 in eighth on the second of the Aprilias as the late lap cancellations pushed Yamaha’s Franco Morbidelli up to ninth for his first Q2 appearance since Indonesia back in March.

Miguel Oliveira was the cause of the one of the late yellow flags after the KTM rider crashed at Turn 4, but was offered a reprieve when lap cancellations pushed him back up to 10th to seal the final Q2 spot.

VR46 Ducati’s Marco Bezzecchi fell afoul of the yellow flag rules and was dropped out of the top 10 by 0.001s to face Q1 alongside Honda’s Pol Espargaro – who crashed late on at the penultimate corner.

There were crashes for Di Giannantonio, Tech3 KTM’s Remy Gardner and LCR Honda’s Takaaki Nakagami, with all three falling into Q1.

Qualifying for the 2022 MotoGP San Marino GP will get underway at 2:10pm CEST.