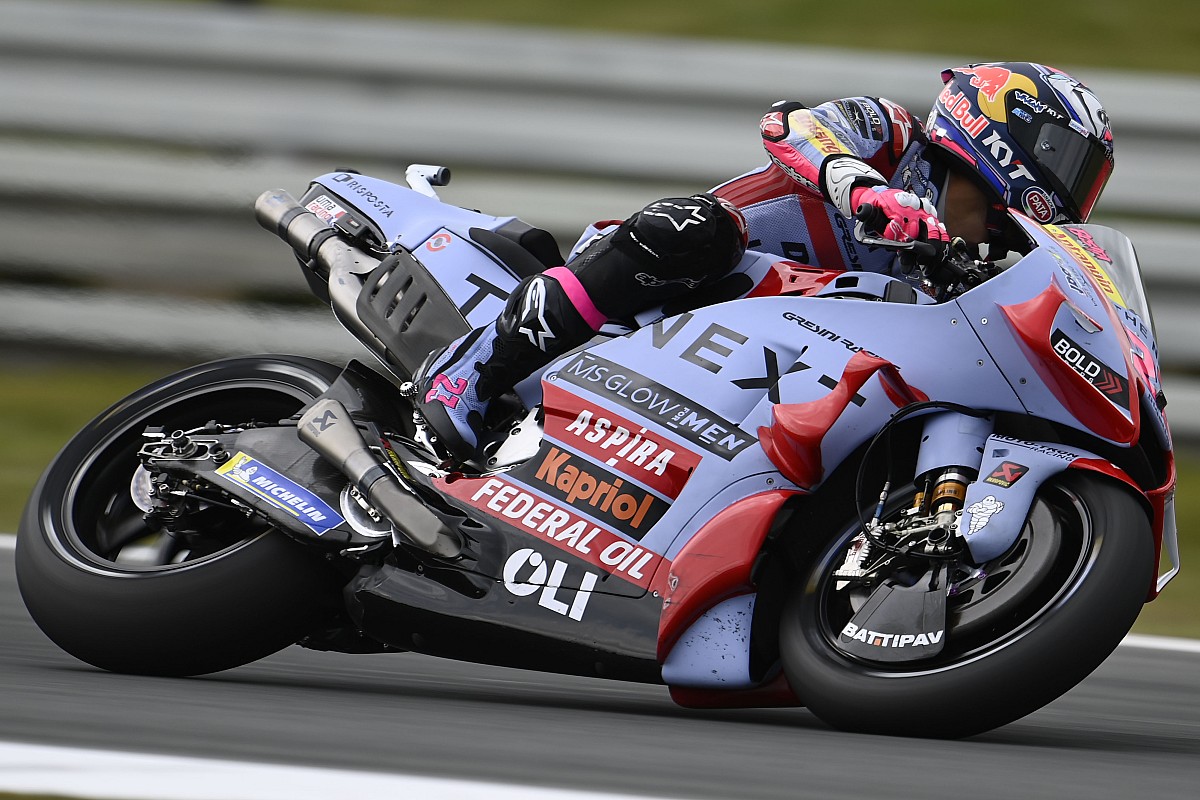 Bagnaia came into this afternoon’s 45-minute session carrying a three-place grid penalty for Sunday’s race after impeding Alex Marquez and Bastianini in FP1.

The factory Ducati rider’s day didn’t get any more straightforward as he suffered a fast crash on the way into the Turn 13 right-hander just under 15 minutes into the session while he was on a flying lap.

Bagnaia was able to return to the session soon after, but was denied top spot in FP2 by Bastianini by 0.114s as the pair ran line astern on their final flying laps.

Pramac’s Johann Zarco set the early pace on his Ducati with a 1m33.135s, but immediately crashed at the first corner when he lost the front-end under braking.

VR46 Ducati rider Marco Bezzecchi took over soon after with a 1m32.759s, before championship leader Fabio Quartararo went fastest on his Yamaha with a 1m32.264s.

Quartararo would improve on his lap time to a 1m32.210s with just under half an hour of the session remaining, with former teammate Maverick Vinales on the Aprilia deposing him 10 minutes later.

Vinales went on a succession of fastest laps, taking over top spot from Quartararo with a 1m32.111s before dipping under the 1m32s with a 1m31.882s next time around.

Quartararo would have one last stab at leading the way with a 1m31.878s, but was powerless to stop himself being shuffled back to fifth at the chequered flag by an armada of Ducatis.

Bagnaia lit up the timing screens on his final lap, while Bastianini on the year-old Desmosedici shadowed him.

Jack Miller on the sister factory team Ducati leaped up to third late on ahead of Zarco, while Vinales was sixth behind Quartararo.

Aleix Espargaro was seventh on the second of the Aprilias from Pramac’s Jorge Martin, Bezzecchi and the Yamaha of Franco Morbidelli – who took his maiden MotoGP win at Misano in 2020.

Pol Espargaro was the first of the Hondas in 11th ahead of KTM duo Miguel Oliveira and Brad Binder, with the former suffering a crash at Turn 10 late on.

Alex Rins trailed them, the Suzuki rider also crashing in FP2. Sliding off his GSX-RR at the penultimate corner, the Spaniard was seen getting angry with marshals as they crated his stricken motorcycle away.

Joan Mir’s Suzuki replacement Kazuki Watanabe made it into the 105% cut-off threshold in FP2 with a 1m36.019s to complete the 25-rider field, though was 4.5s off the pace.

Watanabe also upset Bagnaia at the end of FP2 after the Ducati rider was forced to run on at Turn 1 as he caught the rookie too quickly under braking.

The 2022 MotoGP San Marino GP weekend will continue on Saturday at 9:55am CEST with FP3.