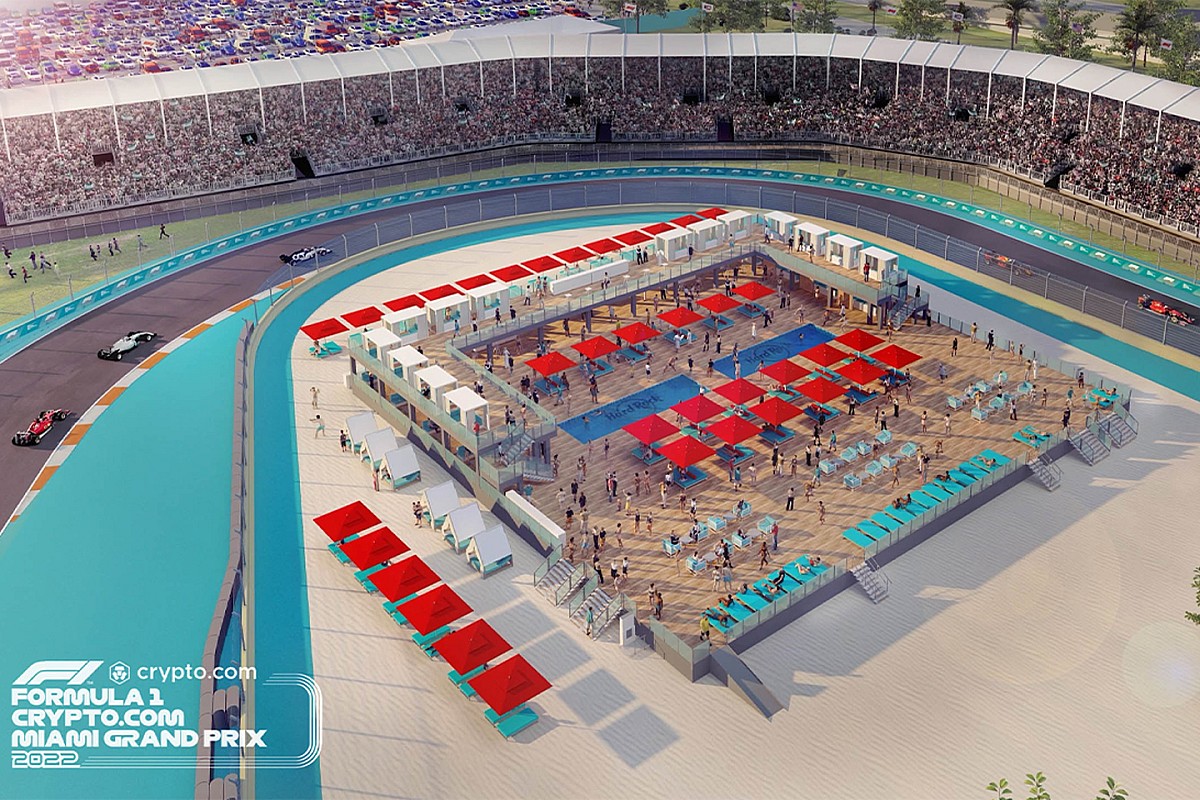 Miami GP organisers have released a rendered flyby video highlighting its multiple high-end hospitality zones and grandstands around the circuit – including a trackside ‘yacht club’ and a temporary beach with swimming pools.

A Monaco-style marina is being constructed – complete with a dozen or so dry-docked yachts – that will be positioned on the infield of the long left-handers of Turns 6-8 of the 5.4-kilometre track.

“To bring the glamour and elegance of Formula 1 and the technology of F1 racing to a dynamic, growing city like Miami right now is fantastic,” said Garfinkel, the managing partner of the event and the Miami Dolphins and Hard Rock Stadium CEO, in a promotional video.

“The idea was how do you create a race for people that are used to going to races to think ‘this is different, this is fun, this is exciting’. I think, first of all, it’s about Miami.

“Miami Gardens, and really the whole south of Florida, it’s become a curator of culture when you talk about fashion and art, music, food and sports. It’s a very attractive place.

“I think from a racing standpoint, we’re introducing the best racing in the world and its technology, best engineering, the best cars and the best drivers to, potentially, a large group of people who haven’t been around it or seen it before.

“I think that can have a large impact on peoples’ lives.”

In spite of expensive ticket prices, the event sold out in just 40 minutes – with resale sites now offering grandstand seats at well over $1000.

As part of its hospitality plans, the circuit has constructed a double-decked Paddock Club above the pit lane overlooking the start/finish line, with a second element that has extended eastwards on the run to the inside of Turn 1, where Heineken also has a garden-style hospitality adjacent to the pit lane exit.

Trackside villas overlook Turns 2 and 3 before The Concours Club grandstand, followed by McLaren, Silver Arrows and Ferrari ‘club’ zones. The Palm and 72 Club areas flank either side of the dramatic podium structure on the opposite side of the stadium to the pits.

To reflect Miami’s coastline location, a beach will be created at the circuit by the Hard Rock Club, which promises a 24,000 square-foot zone featuring resort-style pools and two levels of luxury cabanas featuring musical performances near Turns 11, 12 and 13.

Red Bull, which is a ‘founding partner’ of the event, will also construct a giant custom-built ‘Miami-themed environment’ on the opposite side of the track at Turn 11, with an Energy Station that will feature a large trackside viewing platform.

The Miami Dolphins training complex, opened last year at a cost of $135million, will be turned into the MIA Hospitality Village for the race weekend and the stadium itself will be used as a hub for the ‘campus’ events, including art and music shows.