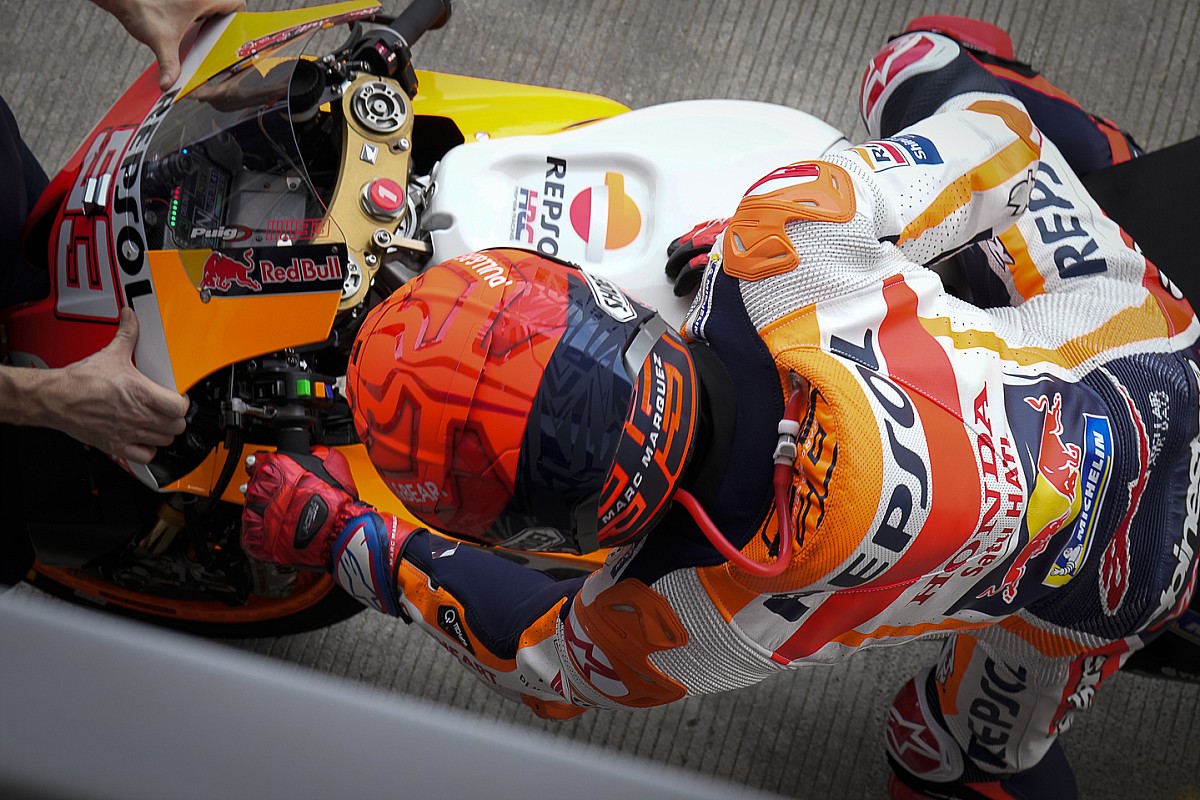 
The Honda rider was thrown from his bike during warm-up at Mandalika last month and suffered a concussion, which ruled him out of the Indonesian GP.

He then started to suffer from diplopia – or double vision – which ruled him out of two races in 2021, and was forced to sit out the Argentina GP while he recovered.

Marquez was passed fit by his personal doctors to return to action in this weekend’s Americas GP at his beloved Circuit of the Americas – though he will have to undergo an official MotoGP medical check at 1:30pm local time.

Speaking on Thursday, Marquez admits he doesn’t remember much from the crash at Mandalika.

“Actually, I don’t remember a lot, I remember more from the video, from the images, than what I feel that I remember,” last year’s Americas GP winner said when asked about the crash.

“But it’s true that the Indonesian GP was one of the worst GPs in my career because I crashed too many times, did some crashes that I didn’t understand, especially the warm-up crash, I was with a new rear tyre and I just had the high side.

Honda was plagued by rear grip issues throughout the Indonesia weekend after Michelin brought a stiffer tyre casing that hadn’t been used since 2018 and was different to the one used in February’s pre-season after those suffered blistering problems.

HRC team boss Alberto Puig hit back at Michelin over comments it made over the Indonesia weekend that suggested Honda simply didn’t know how to adapt to the different tyre casing.

When asked by Motorsport.com at COTA if the tyre was the root cause of his crash, Marquez reservedly tallied with Michelin’s explanation.

“I was lucky because, ok I was injured in the vision, but my body was ok,” he said. “So, even that I miss that race and Argentina I feel lucky about that crash.

“The reason I think was the different casing on the rear that we didn’t adapt well or didn’t change well the set-up to that casing.”

Marquez also admitted he was looking to return in Argentina last week, but “didn’t feel motivated” to go there – and says his approach at COTA can’t be to fight for the win.

“The approach for this weekend, the approach cannot be the victory even because I don’t feel [like I can do it],” he added. “I just want to build up the confidence again, was really hard week after Indonesia.

“I didn’t even feel motivated to come to Argentina and race and I preferred to stay calm. Now it’s just trying to build the confidence again, and if I don’t feel it then don’t push because then an unexpected crash will arrive like Indonesia.”

Marquez was also noted that the risk of his vision problems returning after a crash will remain the same “this weekend and one year, two years” from now having consulted with his doctor.

Quartararo “by far not the favourite” for the 2022 MotoGP title