iPadOS 16 preview: Apple’s software is catching up with its hardware | Engadget 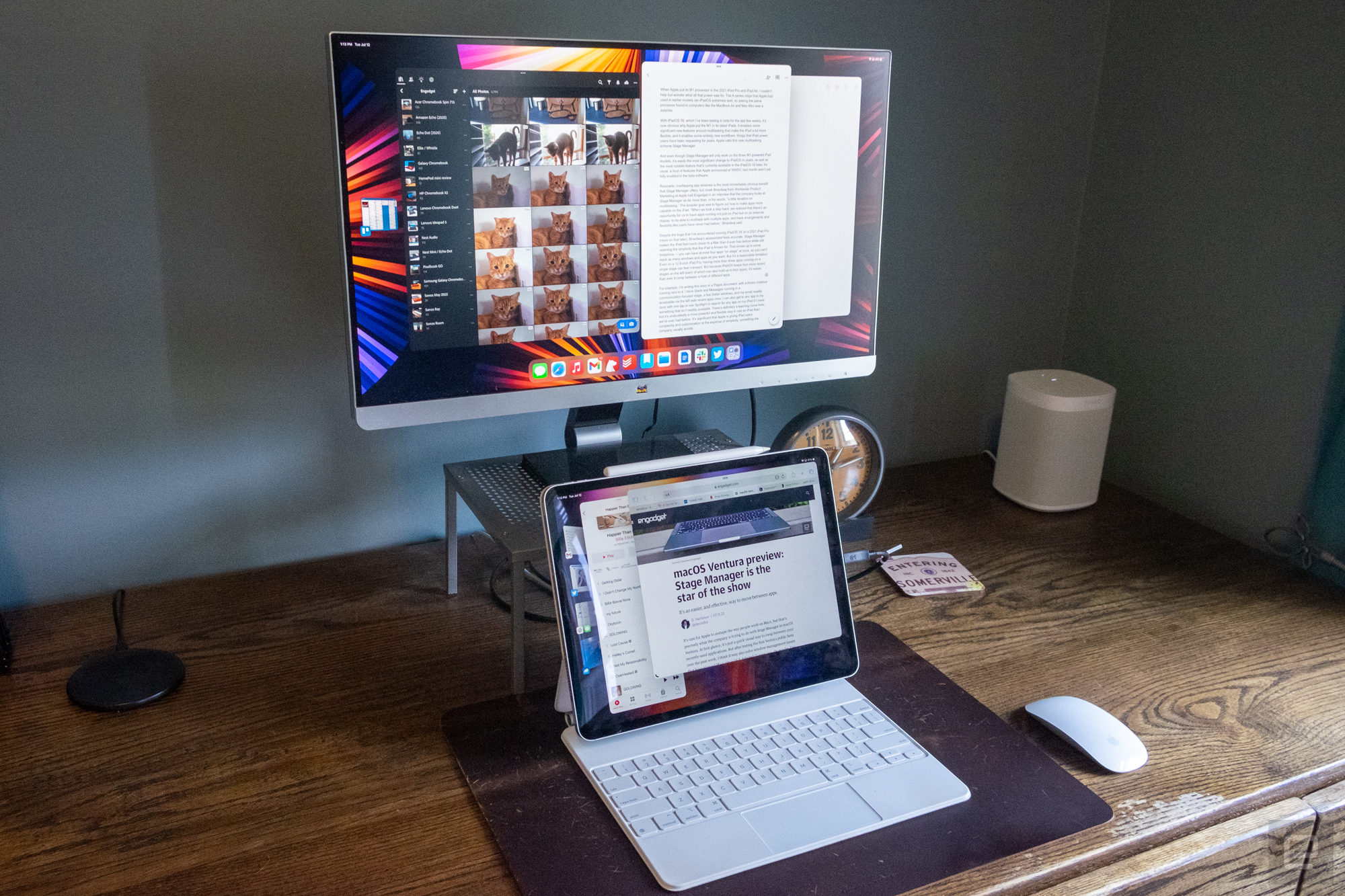 
When Apple put its M1 processor in the 2021 iPad Pro and iPad Air, I couldn’t help but wonder what all that power was for. The A-series chips that Apple had used in earlier models ran iPadOS extremely well, so seeing the same processor found in computers like the MacBook Air and Mac Mini was a surprise.

With iPadOS 16, which I’ve been testing in beta for the last few weeks, it’s now obvious why Apple put the M1 in its latest iPads. It enables some significant new features around multitasking that make the iPad a lot more flexible, and it enables some entirely new workflows: things that iPad power users have been requesting for years. Apple calls this new multitasking scheme Stage Manager.

And even though Stage Manager will only work on the three M1-powered iPad models, it’s easily the most significant change to iPadOS in years, as well as the most notable feature that’s currently available in the iPadOS 16 beta. As usual, a host of features that Apple announced at WWDC last month aren’t yet fully enabled in the beta software.

Resizable, overlapping app windows is the most immediately obvious benefit that Stage Manager offers, but Vivek Bhardwaj from Worldwide Product Marketing at Apple told Engadget in an interview that the company looks at Stage Manager as far more than, in his words, “a little iteration on multitasking.” The broader goal was to figure out how to make apps more capable on the iPad. “When we took a step back, we realized that there’s an opportunity for us to have apps running not just on iPad but on an external display, to be able to multitask with multiple apps, and have arrangements and flexibility like users have never had before,” Bhardwaj said.

Despite the bugs that I’ve encountered running iPadOS 16 on a 2021 iPad Pro (more on that later), Bhardwaj’s assessment feels accurate. Stage Manager makes the iPad feel much closer to a Mac than it ever has before while still retaining the simplicity that the iPad is known for. That shows up in some limitations — you can have at most four apps “on stage” at once, so you can’t stack as many windows and apps as you want. But it’s a reasonable limitation: Even on a 12.9-inch iPad Pro, having more than three apps running on a single stage can feel cramped. But because iPadOS keeps four more recent stages on the left (each of which can also hold up to four apps), it’s easier than ever to jump between a host of different apps.

For example, I’m writing this story in a Pages document, with a Notes instance running next to it. I have Slack and Messages running in a communication-focused stage, a few Safari windows, and my email readily accessible via the left-side recent apps view. I can also get to any app in my dock with one tap or use Spotlight to search for any app on my iPad if I need something that isn’t readily available. There’s definitely a learning curve here, but it’s undoubtedly a more powerful and flexible way to use an iPad than we’ve ever had before. It’s significant that Apple is giving iPad users complexity and customization at the expense of simplicity, something the company usually avoids.

This is doubly true when you hook up an iPad to an external display. Before, you’d just get a mirror image of what is on your iPad’s screen, but now the external display is an entirely separate workspace. With Stage Manager, you can have a distinct set of apps running on that monitor, something that makes using an iPad with another display significantly more useful than it ever was before — and another example of why Stage Manager requires an M1-powered iPad.

That said, in its unfinished form, Stage Manager is a bit rough around the edges. When I was using my iPad with an external display, the system crashed and threw me back to the home screen not infrequently, which obviously kills productivity gains. There are also quirks with apps behaving unpredictably when resizing their windows. I’d expect these things to be improved by the time iPadOS 16 is officially released this fall, but just be aware that the beta still feels very much like a beta.

Stage Manager, which is also coming to macOS Ventura, provides a clear example of how Apple differentiates its platforms even when they share features. “On the iPad, we looked at how do we optimize [Stage Manager] for multitouch?” Bhardwaj said. “Because we know people are going to want to interact with it, we had to make adjusting windows and overlapping windows not feel overwhelming, not feel like you have to have fine cursor control and pixel-perfect arrangement.” That led to a lot of automation in terms of how windows interact with each other and where they’re placed when you add apps to a stage or resize them.

On the Mac, though, the behavior is different because of the user’s expectations for the platform and the tools you use to interact with it — specifically, a mouse rather than your fingers. “People actually need fine-grained control because that’s the behavior and usage of Mac,” Bhardwaj said.

Before Apple showed off Stage Manager at WWDC, the rest of the iPadOS 16 preview was dominated by new collaboration features. In a world that’s been remade by the COVID-19 pandemic, remote work is more common than ever, and Apple is clearly trying to make the iPad even more of a productivity tool than before. And it’s doing so by using its incredibly popular Messages app as an entry point.

Apple’s new collaboration API means that you can share things like a Pages, Numbers or Keynote document with a group via Messages, and the recipients will be able to all work on the document in real time. Previously, this would just send a copy of the document, but now everyone in your group will be able to make changes, with updates tracked in the Messages thread. You can also jump directly from a document into a FaceTime call with your group. “Communication often is the first place where we start ideation,” Bhardwaj said. “When you look at Messages or FaceTime, our customers have been using them for a long time; it’s such an integral part of the way our sets speak to family, friends, teammates, colleagues.”

Google and Microsoft have had real-time collaboration for years, and it’s not new to Apple’s iWork suite either. What is new is the deep integration with Messages and FaceTime. That likely won’t be enough to draw in users who are already committed to using Google Docs or Microsoft Office, but Apple’s new collaboration features aren’t limited to just those apps. For example, you can share a group of tabs from Safari, or share content from Notes and Reminders. And Apple is also extending SharePlay, which it introduced last year as a way to watch videos or listen to music with friends, to Messages as well. Additionally, you can now use SharePlay with games, so you compete with a friend over FaceTime.

Perhaps most importantly, though, Apple is making a Collaboration API available to third-party developers. Offering a more seamless way to collaborate using Messages, one of the most crucial apps Apple offers, could be an important new tool. “For developers, they want to meet the user where they’re at, where the conversation is happening,” said Bhardwaj. “For many people, that’s in apps like Messages and FaceTime. So this is exciting for a developer because a conversation that was organically already happening can now be a great jumping-off point into their app.” We won’t know if this happens until after iPadOS 16 is out, of course, but the ubiquity of Messages on Apple’s hardware make it a logical tool for developers to support.

Freeform, a new app that unfortunately isn’t available in the iPadOS 16 beta, is perhaps the best example of how Apple sees communication and collaboration intersecting. From a FaceTime call, you can create a new Freeform board, which is a space that everyone you invite can contribute to, whether that’s adding text, web links, documents or notes and drawings made with an Apple Pencil. Each contributor is highlighted as they add things to the space, and you can tap on someone’s name from the share menu to see exactly what they’re up to. Adding more material is simply a matter of zooming out and picking a free space.

The easy comparison is that it’s a virtual marker board — not at all something meant for formal presentation, but a good place to brainstorm. While Freeform will also be available on iPhones and Macs, it feels uniquely suited to the iPad. It looks like it’ll be most easily navigated via a large touch screen, and Apple Pencil users will likely find it a good place to use their stylus.

Naturally, there’s a host of new features in iPadOS 16 that are shared with macOS Ventura and iOS 16. The Mail app now supports scheduling emails, undoing send and a much-improved search interface, while the Messages app lets you edit and undo sending as well. The Photos app now includes a shared photo library, with new pictures and edits automatically syncing between family members. And there’s an official Weather app, some 12 years after Apple shipped its first iPad! (Joking aside, the Weather app is really nice, with tappable modules that show lots of detail on various conditions.)

In a lot of ways, it’s a typical iPadOS update: There are a host of new features, most of which are nice to have but won’t fundamentally change the way you use an iPad. But, the combination of features like Stage Manager, Freeform and the new collaboration tools point to how Apple intends to make the iPad more suited to productivity than it has been before. We’ll have to wait until iPadOS 16 is finalized and released this fall to judge how successful this update is. But after feeling like iPad hardware was outpacing what its software could do, we’re glad to see Apple making some big changes to iPadOS this year.