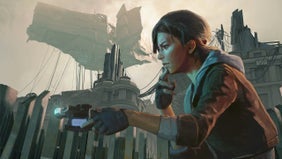 
Half-Life Alyx is one of the best VR games around, and a talented team of modders are building upon the original with a campaign expansion titled Half-Life Alyx: Levitation. At today’s PC Gaming Show, seven minutes of gameplay were revealed for the upcoming mod, which follows up on the events from the main game’s campaign.

The mod is coming from CS:GO map designer and artist Shawn Snelling, who is known as FMPONE in the modding community, and animator Corey Laddo, who is known among Half-Life fans for creating viral G-Man memes. The two modders, along with a team of volunteer modders, animators, and voice actors, have created the free campaign that takes between four and five hours to complete. The story picks up right after the end of Half-Life Alyx. You can check out the gameplay video below.

The gameplay shown follows Alyx as she battles Combine soldiers and headcrab zombies on her search for the source of a massive energy signature. The gameplay video teases G-Man watching Alyx’s moves from the shadows. Half-Life Alyx: Levitation is set to release on the Steam Workshop in Q3 of 2022.

The fan modding community and Half-Life have long been intertwined, as 2020 saw the official release of Black Mesa, a third-party remake of the original Half-Life. Half-Life: Alyx represented the first official entry in the franchise since 2007’s Half-Life 2: Episode Two, but hopefully not the last. Speaking to IGN in March of 2020, Half-Life Alyx developer Chris Remo said people at Valve “are very excited about the Half-Life universe”.