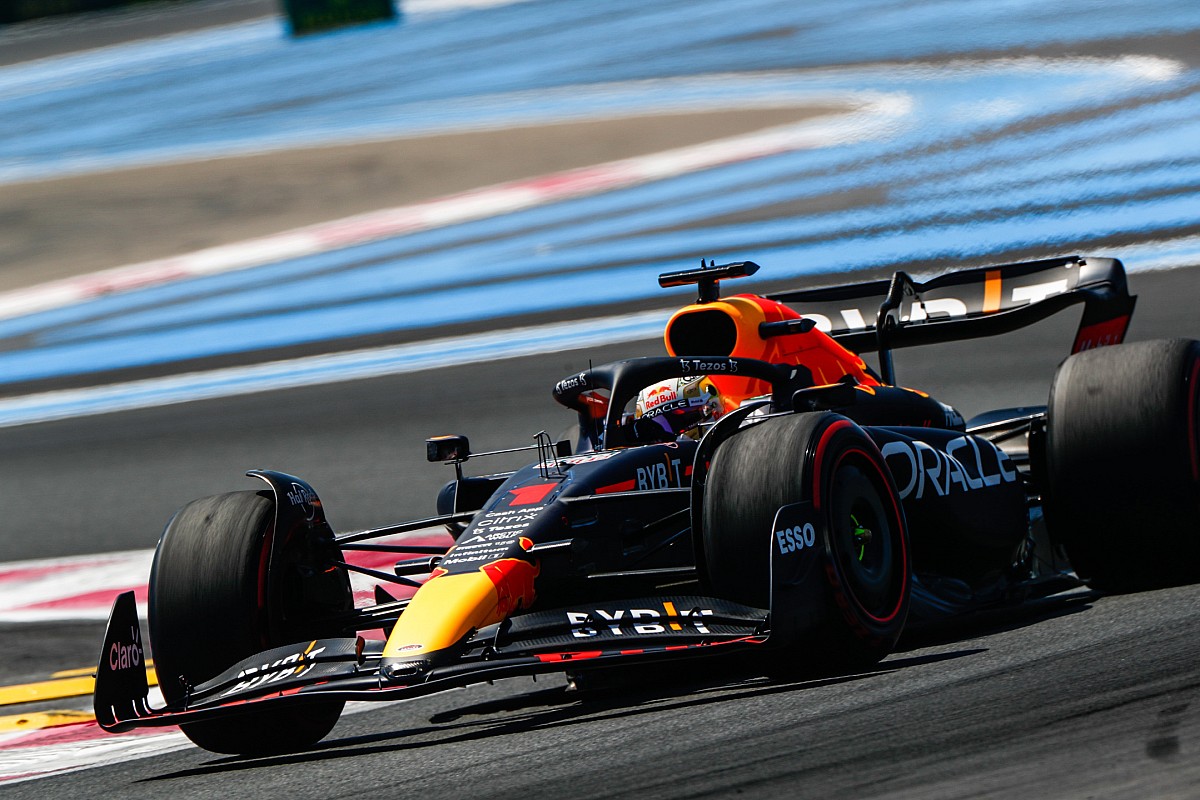 Sergio Perez got the final hour of practice at a toasty Le Castellet underway. Red Bull’s Mexican driver was also the first man to get a tentative time on the board with a 1m33.628s on medium Pirelli tyres.

Perez’ teammate Verstappen also came out uncharacteristically early after admitting Red Bull had run some experiments in FP2, taking to the track after only a handful of minutes to try a different set-up.

The reigning world champion immediately took eight tenths out of Perez’ time to go top with a 1m32.837s on mediums and then improving to a 1m32.808s, just three tenths off Carlos Sainz’s best time from FP2.

Perez got to within half a second of the Dutchman on his second attempt, until Ferrari’s Sainz split the two Red Bulls with a 1m33.217s effort.

Shortly after his teammate Charles Leclerc had spun off at the tricky Turn 12 left-hander, Sainz too had to abort what looked like a potential fastest lap after going wide through the preceding Beausset double right-hander.

Mercedes’ Lewis Hamilton briefly took third with a 1m33.255s on softs, a prelude to a flurry of more soft-shod attempts.

Sainz briefly reclaimed second with a 1m33.172s lap, only to be demoted again by Leclerc’s 1m32.909s, still one tenth removed from Verstappen’s time on mediums.

Sainz, who is set to start from the back of the grid after taking a new Ferrari engine, finally overhauled the Red Bull in the final 10 minutes by virtue of a 1m32.626s lap, proving quicker in the first and third sector.

But Verstappen immediately replied on his first lap on softs by definitively reclaiming top with a 1m32.272s effort.

Sainz and Leclerc finished the session in second and third, three and six tenths down respectively, followed by Hamilton in the Mercedes, the Briton a second behind on Verstappen’s time.

Perez and Hamilton’s teammate George Russell followed in fifth and sixth, ahead of Fernando Alonso, who set a promising seventh time in Alpine’s home race with a late improvement.

The second McLaren of Daniel Ricciardo was 11th, narrowly ahead of the second Williams of Nicholas Latifi.

Kevin Magnussen, who will also start from the back of the grid due to an engine penalty, was 16th in the first Haas, following by Alpine’s Esteban Ocon.

Aston Martin languished down the bottom with Lance Stroll 18th and Sebastian Vettel last, the pair being split by the second Haas of Mick Schumacher, who spent the middle part of the session in the garage.

Aston Martin said Vettel was unable to complete his final runs due to car damage.