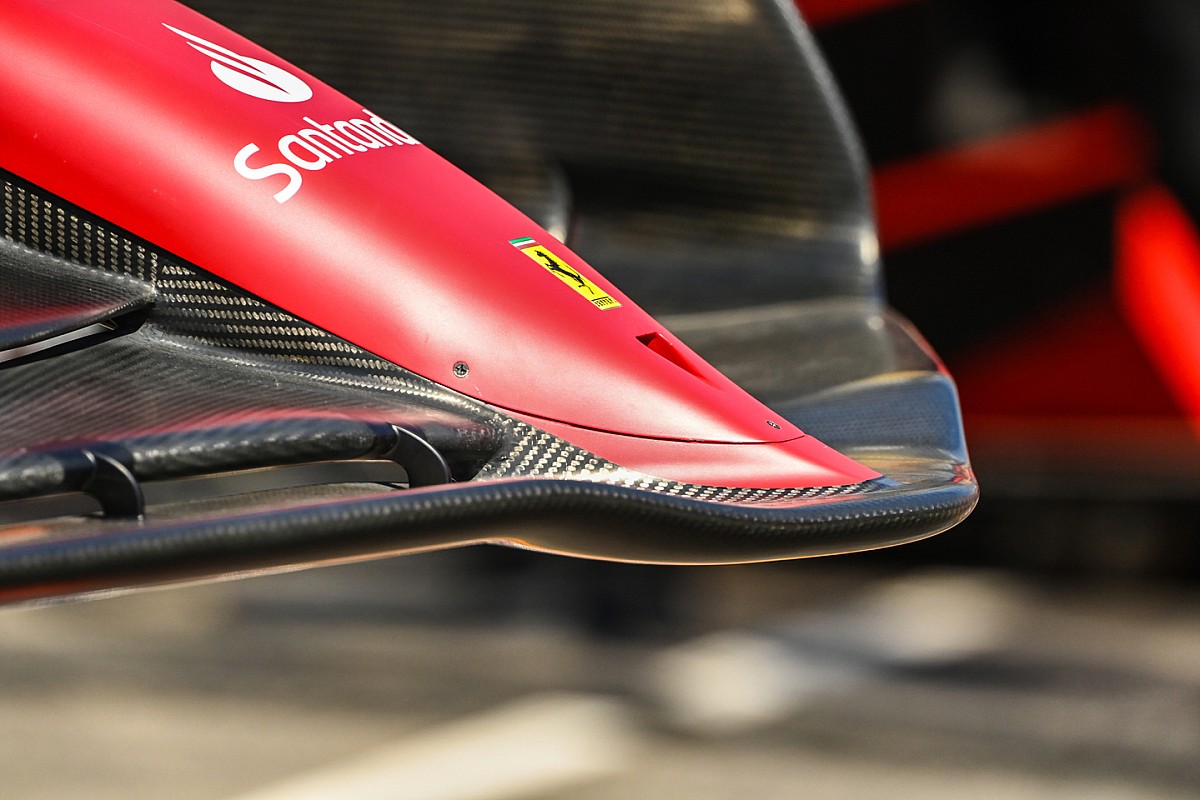 As part of it upgrade package for the French Grand Prix, Mercedes has made changes to its nose, with the nasal passages of the driver cooling holes increased in size.

At the other end of the car, we’re treated to a rare view of the rear brake duct from behind, which, as you’ll note, has some fins mounted on the drum in order to help redirect the airflow as it passes by.

Underneath the DRS pod, we’re welcomed by the sight of the actuator and mechanism that’s used to raise the upper flap when DRS is deployed.

Ferrari’s new floor that’s mounted on Charles Leclerc’s car which features a much lower outer portion for the tunnel entrance, and thus a more defined ramp-like dropout into the sidepod undercut.

Here it is from the other side, showing how much lower the outer portion of the tunnel entrance is compared with the innermost section.

Ferrari also ran a damper system as part of their bib stay set-up in order that the bib doesn’t oscillate too much as the vertical force is applied when the plank touches the track.

A wider view of the Mercedes W13’s rear end which was detached from the main chassis whilst mechanics prepared the car for action. Note the wider span rear wing which the team have recently introduced, with the flapped outer section straightened as it meets with the endplate, rather than creating a spiraled arc.

A look at the inner goings-on of the McLaren MCL36’s brake assembly, with its brake disc shroud and wrap-around caliper ducting. Also note the shape of the floor and fences in the background.

A look at the bib section on the Alpine A522 with a thick scythe-shaped stay used to bridge the gap between it and the chassis.

A look at the rear brake set-up on the AlphaTauri without the outer drum in place. Note how it is using a disc shroud at the rear of the car, just as it does at the front.

Alpine’s front wing, which you’ll note has an S-shaped diveplane mounted to the endplate, whilst the upper flap has been trimmed back in the central section to help with balancing its rear wing choices.

At the other end of the car, Alpine has an array of options now when it comes to rear wings, with the team opting for its latest installment once more.

A look at the Ferrari F1-75’s front end without the nose and vanity panel attached. This affords us a view of some of the inboard suspension elements.

A look at the newer specification front wing endplate diveplane on the VF-22. Haas has had this specification up its sleeve since Silverstone but has yet to race it. It will likely back-to-back the two variants again this weekend before choosing which option is more suitable.

For comparison here’s the older specification diveplane, which has more of a wishbone style appearance.

The Alpine A522 being under construction reveals a few details, including its scythe-like bib stay which is ordinarily hidden behind the bodywork. The two inlets on the bulkhead, which marry to the channels in the nose, feed cool air to the driver, while the stickers that have been placed on the brake drum to monitor the temperatures.

A good shot of the Red Bull RB18 under construction, with the calipers unmounted we can see the brake disc, which in the upper section is covered by the fairing which has been continually optimised throughout the first half of the season.

The RB18’s brake assembly now with the caliper and some of the drum installed for comparison.

The steering wheel of the Alpine A522 with the various buttons, rotaries and switches that help to control the various power unit and chassis functions.

The plank, as used by Haas, which you’ll note has titanium skid blocks inserted around the holes used to measure flex and wear.

The sidepod cooling gill panels on the Haas VF-22 opened up to the maximum to cope with the demands of the heat at Paul Ricard.

A look at the front brake assembly on the Haas VF-22 whilst the brake drum is not attached. Note the caliper surround which is supplied cool air from the main inlet scoop and also has a heat resistant coating to help manage temperatures further still.

Ferrari with its noses awaiting construction outside the garage. Like many teams it has opted to have a vanity panel on the forward section of the nose in order that it can make changes to its design if they see fit without the need for repeated crash tests.

Now with the front wing attached on the F1-75, we can see where the vanity panel bridges the gap between the nosecone and the front wing.

The Alfa Romeo C42’s front wing with the upper flaps detached on one side shows how much of the wing is moveable.

Hamilton: “Not spectacular” Mercedes slower than expected in France