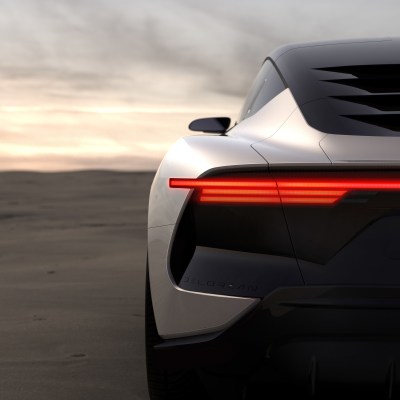 
DeLorean, the automaker behind the pop culture icon gull-winged car, provided a fresh teaser image and a debut date of an all-electric vehicle concept that aims to breath new life into the brand.

The upcoming EV concept is the latest effort of Stephen Wynne, who owns the DeLorean name and supplies parts for the 6,000 or so remaining vehicles, to revive the brand. Wynne partnered with several Texas executives who more recently were connected to Karma Automotive. DeLorean Motors Company CEO Joost de Vries formerly worked at Karma.

The teaser image shows a three-quarter shot of the vehicle, specifically the left shoulder and back tail light of the concept car. Not much more is known, but if DeLorean follows the path of virtually every other automaker, we can expect many more teasers to come.

In a Linkedin Post, de Vries wrote “Yes, a teaser as it doesn’t show the whole vehicle yet, but a great shot of the rear quarter ! Looking forward to share more soon….”

The new EV concept, which was first announced in a social media campaign before the Super Bowl LVI, will debut during Monterey Car Week in August, the company said Monday. Along with the reveal, DeLorean will also announce the official name of the vehicle. The DeLorean EV concept will be displayed August 21 on the concept lawn at Pebble Beach during Monterey Car Week.

The company said in its announcement that the “past, present, and future of DeLorean will unfold over the duration of Monterey Car Week through a series of activations and events showcasing the vehicle.”

Concept is the important word here, which means its future as a vehicle that consumers can buy and drive is not clear. It could, as so many concept cars before it, end up in the figurative trash bin. Bringing the vehicle to production will take capital — and lots of it. Just ask Fisker, Rivian, Lucid and the half dozen other EV startups that have tried to develop and produce an EV.