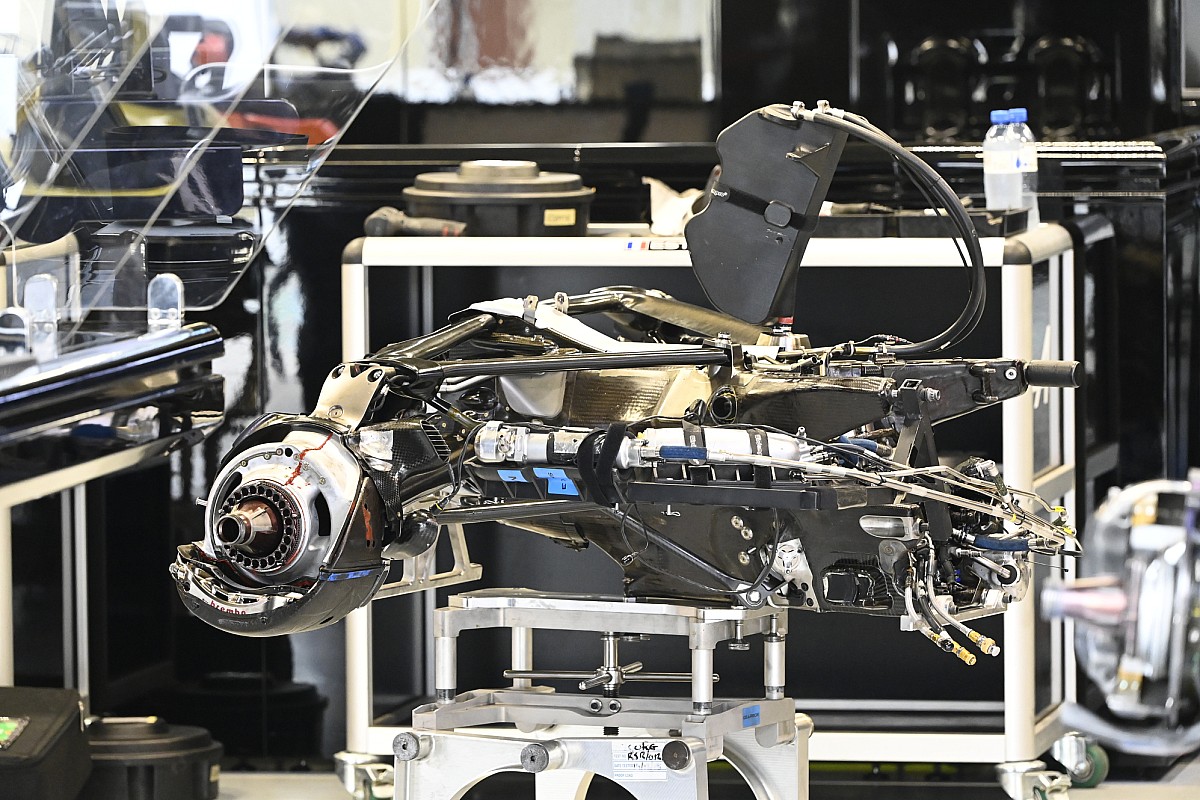 This shot of the Red Bull RB16B during its preparation is full of detail, including a look at the front brake duct, the inboard front suspension, the auxiliary oil tank mounted under the chassis, the radiator layout inside the sidepods and the saddle mounted cooler above the power unit.

Alpine A521 in the garage

A peek inside the Alpine garage as they begin to prepare the cars for action.

The AlphaTauri AT02 tub sits in wait, as the power unit, radiators and other coolers need to be mounted.

The Alpine mechanics prepare the front end of the A521 as they await the power units to arrive. We can see both the upper and lower impact-support spars ahead of the sidepods as there’s no bodywork in place to disguise them.

A huge amount of the Alpine A521’s gearbox carrier, rear suspension and rear brakes can be seen in detail in this shot.

The front brake assembly during the build process on the Aston Martin AMR21, note the similar bell arrangement with the diamond-shaped drill pattern used to help guide the airflow through the assembly.

A look at the stacked radiator layout within the Ferrari SF21’s sidepods.

A look at the front end of the Mercedes W12, including some of the inboard suspension elements, one of the brake reservoirs and the steering rack.

Still at altitude, but without the extreme requirements of Mexico, Red Bull has returned to a medium downforce setup in Brazil, once again utilising the spoon-shaped rear wing.

Showing the disparity from the front to the rear of the grid, Haas still has to carry a relatively high downforce package in Brazil.

Mercedes has also edged more towards a mid-downforce package, as denoted by the use of the Y-shaped T-Wing.

A great view of the McLaren MCL35’s bargeboard cluster and sidepod deflector, also note how the sidepod bodywork drops off as it hugs the radiators and coolers within.

Ferrari using a relatively large cooling outlet at the rear of the car, which you’ll note is subdivided by the horizontal vane beneath the upper wishbone.

The right-hand front brake drum arrangement on the Ferrari SF21 utilises the bypass cavity in order airflow channeled across the face of the assembly is exposed to the wheel rim.

The Ferrari appears to be set up asymmetrically, as on the left-hand side of the car the team have installed an enclosed-drum design, altering the aerodynamic and thermal interaction between it and the wheel rim.

Red Bull has returned to their more conventional full bypass cavity with a thermal barrier applied to the panel, having run a more open configuration in Mexico.

The bargeboard cluster on the Red Bull RB16B – note the feather-like top edge of the main vertical element.

The bargeboard cluster on the Mercedes W12 for comparative purposes.

As Lance Stroll climbs out of his Aston Martin AMR21 we get a great view of the two vortex generators atop the sidepod wing.