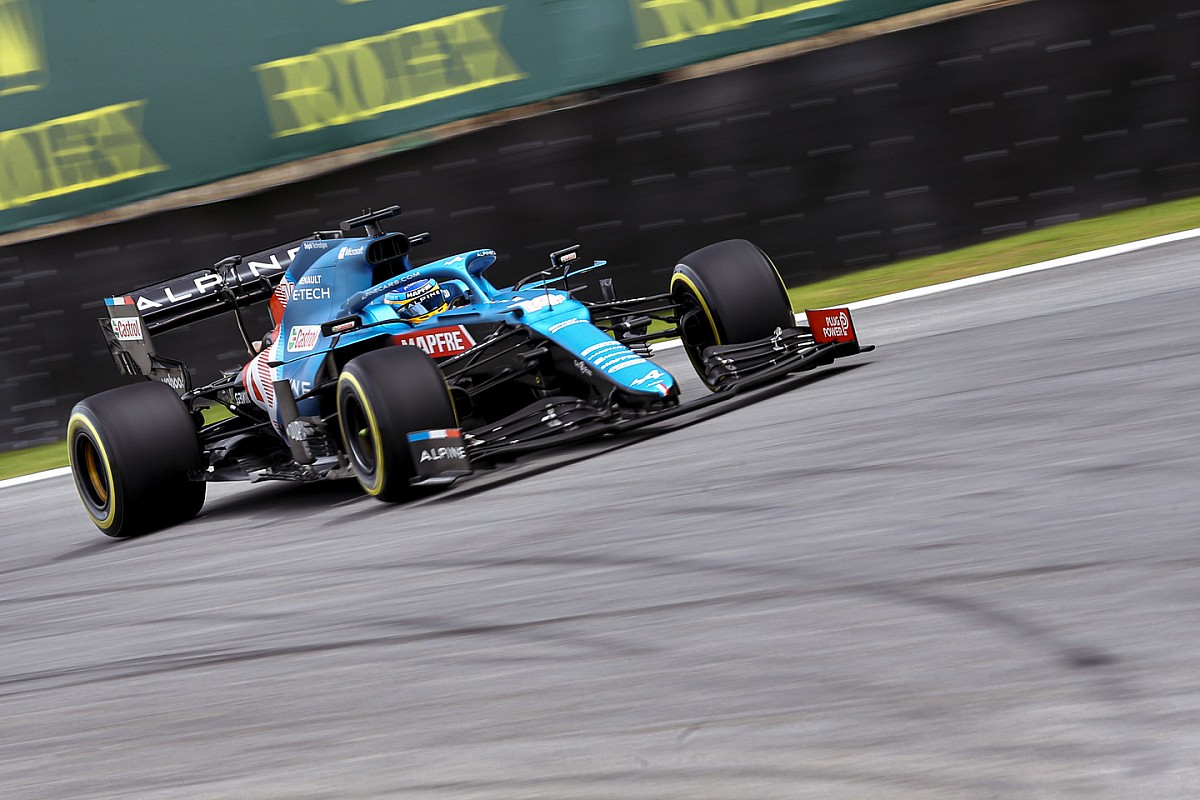 Brazil’s second practice session got underway without a long-awaited decision on Lewis Hamilton’s rear wing case or Verstappen’s parc ferme dalliance, potential penalties for either title contender hanging over the Interlagos weekend – and the 2021 title fight at large – like a dark cloud.

Kimi Raikkonen opened the session with a 1m14.604s on medium tyres as all four Alfa Romeo and Haas cars warmed up the track during the opening stages of the one-hour session.

AlphaTauri’s Yuki Tsunoda briefly took top before the 10-minute mark but was immediately deposed by Sergio Perez, who clocked a 1m13.219s in his soft-shod Red Bull.

Teammate Verstappen followed suit and immediately established three purple sectors on his way to a 1m12.102s on the softs, while Hamilton and the second Mercedes of Valtteri Bottas remained in the garage unhurried.

Alpine’s Esteban Ocon split the two Red Bulls with a medium tyre lap just under a second away from Verstappen, with the second AlphaTauri of Pierre Gasly joining Tsunoda in the top five.

Hamilton and Bottas finally entered the fray after 20 minutes for several low-key laps on softs, some two seconds off the pace in 15th and eighth respectively.

Hamilton, who is set to start today’s F1 sprint from pole pending a verdict on his DRS infringement in Friday qualifying, circulated without apparently using the overtaking aid on a new, identical Mercedes rear wing, his original wing assembly still impounded by the FIA for investigation.

After the halfway mark, Perez leapfrogged Ocon to make it a Red Bull 1-2, staying eight tenths down on Verstappen with a 1m12.903s lap on mediums, both Red Bulls moving to longer stints on the yellow marked tyre.

With 20 minutes left, the Spaniard vaulted to the top of the leaderboard on softs, dipping eight tenths below Verstappen’s erstwhile benchmark with a 1m11.238s as laptimes were still over three seconds removed from Friday’s qualifying session.

Alonso’s time held until the end ahead of Verstappen, while Bottas took third with a late effort on softs, 1.1s behind the Alpine driver.

Ocon was fourth while Hamilton moved up to P5 in the final minutes of the session during a longer soft tyre stint.

Raikkonen ended up in 10th, narrowly ahead of Aston Martin’s Lance Stroll.

Sebastian Vettel was 17th in the second Aston, followed by the second Williams of Nicholas Latifi.

The bottom of the table was a familiar sight as the two Haas cars of Mick Schumacher and Nikita Mazepin propped up the timesheets.