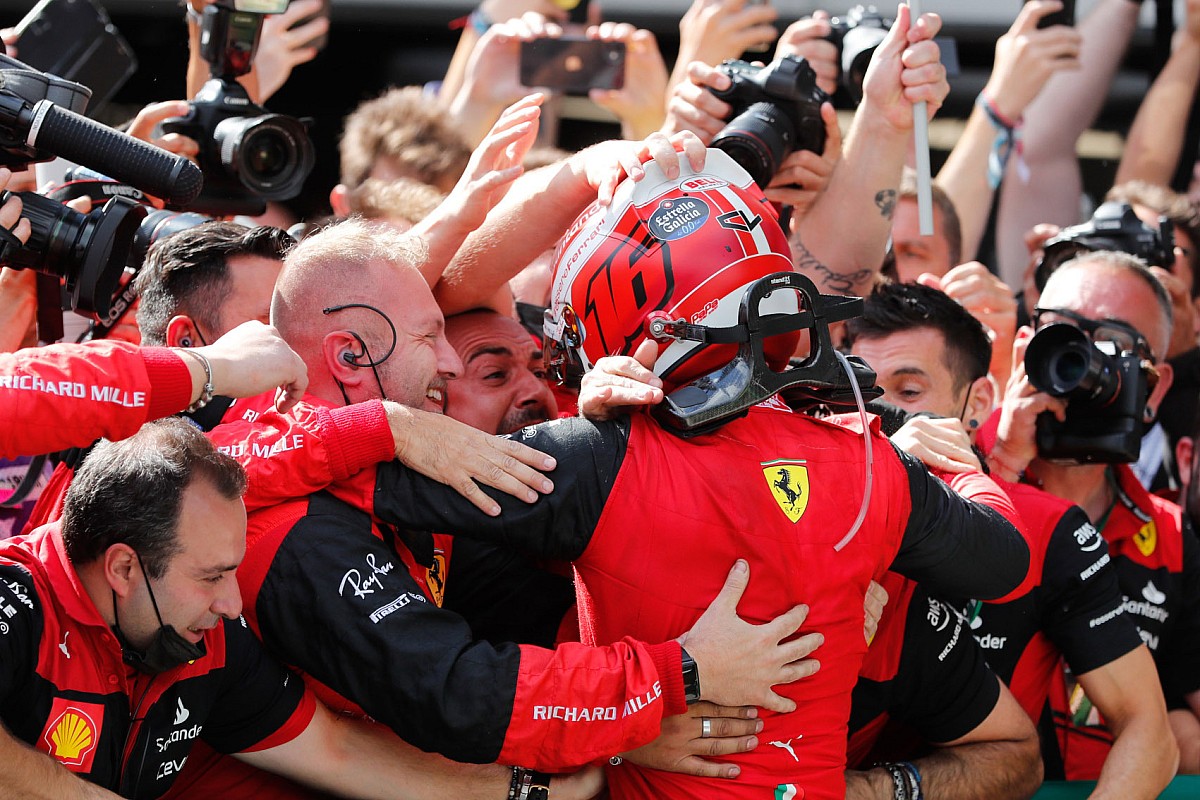 Leclerc, who had not been on the podium since Miami, passed Verstappen three times on track as the Ferrari and Red Bull drivers were placed on different strategies.

A late throttle pedal worry did threaten to derail Leclerc, but he held on for his third win of the 2022 Formula 1 season.

However, he was not joined on the podium by Sainz, who showed similar speed and was set to follow Leclerc over the line but was eliminated by a late engine fire to hand Lewis Hamilton third place.

Verstappen led a fast formation lap in a bid to generate tyre temperature and on the medium tyres, enjoyed a tidy launch to hold the middle line and consolidate the lead into Turn 1.

Leclerc maintained position in second as third-starting Sainz was squeezed on the outside to rejoin side-by-side with George Russell, before he fought back past on the inside into Turn 3.

Sergio Perez, from fifth, could then have a sniff at the Mercedes with a drag race out of the right-hander, which left him on the outside for the Turn 4 left.

But Russell nicked the right-rear of Perez’s Red Bull with his front-left to send the RB18 spinning into the gravel, albeit he rejoined by finding the asphalt run off by the barrier.

Ahead, Verstappen found a 0.985s over Leclerc at the end of lap one of 71, with Sainz a further 1s back while Perez eventually recovered to the pits for hards although would retire on lap 17.

Unlike the Saturday sprint race Verstappen won, the defending champion was not able to break away in the early laps as Leclerc within the 1s window to keep hold of DRS.

On the sprint out of Turn 1 to Turn 3, the gap fell to as little as 0.5s and with Perez heading for an early bath, Ferrari had the potential to splits its strategy to leapfrog Verstappen.

Leclerc had his first tentative look up the inside of Verstappen into Turn 3 on lap 8 but thought better of it for the next three tours.

Then on lap 11, Leclerc made his move – slicing down the inside into Turn 3. Verstappen, slower in the opening phase, gave his chief title rival room and barely put up a fight.

Verstappen tried to offer a rebuttal on the outside of Turn 4 but locked up to fall behind.

Despite a big moment of oversteer and then a couple of lock ups for Leclerc, setting the fastest lap of the race at that stage allowed the Monegasque to break free of DRS.

That prompted Verstappen to put for a set of hard tyres at the end of lap 13 but he was delayed with a 3.2s stop courtesy of a slow front-left change to emerge in traffic.

That left Leclerc to lead over Sainz by 2.5s as Verstappen had to carve his way past Mick Schumacher for fifth around the outside of the Turn 2 kink before demoting 2021 arch-rival Hamilton with relative ease by cutting back to get a good exit from Turn 3.

The Ferraris kept pounding round without stopping, Leclerc holding a 4s advantage over Sainz before the race leader hit the pits at the end of lap 26 for a slick 2.6s switch to hards.

Sainz immediately pitted the lap after for hards, the Scuderia duo returning to the track behind Verstappen but with the upper hand on race pace – Leclerc setting a new fastest lap.

On lap 33, Leclerc closed within DRS range of Verstappen before another cleanly decided move for first place at Turn 3. An early pass allowed Verstappen to fall back and gain DRS for the run to Turn 4 but he opted against a proper retaliation to confirm second place.

With Verstappen complaining of unpredictable grip levels, Red Bull pitted him again on lap 37 for another set of hards, which afforded Ferrari room for another stop 12 tours later.

Leclerc and Sainz both enjoyed quick changes to another set of hards but again faced the prospect of demoting Verstappen, the Dutch racer 2.5s ahead with 20 laps left to play.

Again, Leclerc was quickly into a rhythm on the white-wall rubber to only two laps later gain DRS on Verstappen, the Ferrari moving to the outside for the run to Turn 3.

Leclerc smartly left Verstappen have the apex but turned sharper to jump on the throttle sooner and nail the exit to power back into the lead for the final time.

Sainz was then about to demote Verstappen for a Ferrari 1-2 but on the run to Turn 4, running in the Red Bull’s wake, a wisp of smoke started to waft out of his engine cover.

The Ferrari’s engine then failed spectacularly, with Sainz trying to pull up on the exit as flames burst but the slope of escape rolled meant he struggled to stop the car and jump out.

As flames crept towards the cockpit, Sainz was eventually able to hop out as the virtual safety car was triggered, Leclerc then holding 5.4s over Verstappen.

At the end of lap 58, Leclerc used the slower conditions to stop for mediums and was followed by Verstappen for the run to the line.

Leclerc then complained about as throttle issue, the pedal not retracting fully to make the run through Turn 3 particularly challenging as the margin at the front came down.

A 4.1s lead when the VSC ended began to fall, but Leclerc would hold on to seal the victory – his first since the Australian GP – by 1.5s over Verstappen to chip away six points.

Hamilton was a distant third, crossing the line 40s behind the top two. But he was placed on a two-stop strategy rather than three and delivered a remarkable surge up the order from ninth. The Mercedes driver’s race was notable for an entertaining dice with both Haas cars and then a DRS pass on Esteban Ocon.

Daniel Ricciardo ran to ninth while Fernando Alonso completed the top 10, having survived a squeeze onto the grass by Yuki Tsunoda that prompted the two-time champion to wag his finger out the cockpit as he continued to fight for position.

Alonso, however, is facing an investigation for an unsafe release in his pitstop.

A difficult weekend for Pierre Gasly culminated in 15th, the AlphaTauri again in the wars – this time gaining a 5s penalty for catch Sebastian Vettel at Turn 4 and spinning the Aston Martin into the gravel. Vettel too was reprimanded by 5s as part of a litany of track limits penalties dished out through the field.

He finished 17th, behind Tsunoda, to only head retirees Sainz, Nicholas Latifi and Perez.

Share
Facebook
Twitter
Pinterest
WhatsApp
Previous article3 inspirational books everyone should read this summer, according to life coaches
Next articleHitting the Books: Modern social media has made misinformation so, so much worse | Engadget
- Advertisement -