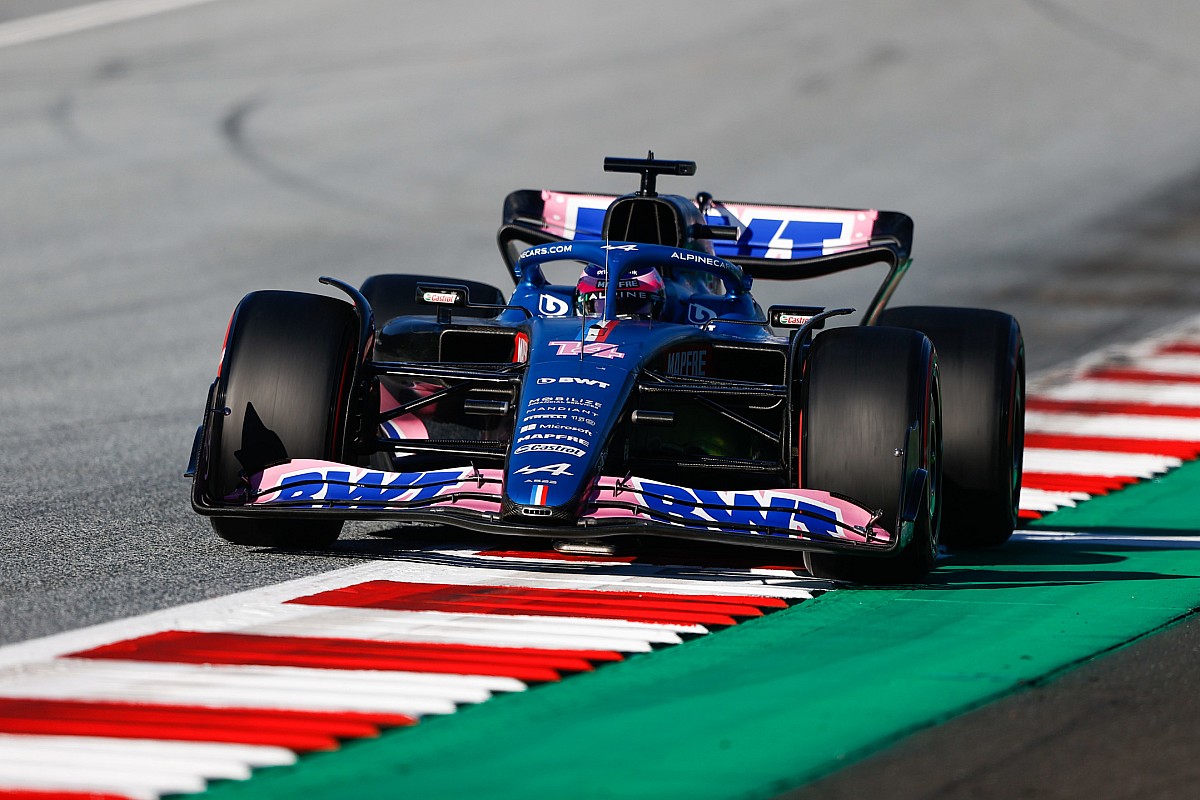 
The double world champion was forced to start Sunday’s 71-lap grand prix from the back of the grid after his Alpine went into “full blackout” ahead of Saturday’s sprint race, which he was due to start from ninth.

Alpine put Alonso on the hard tyre to begin with, which he used to coast into the top 10 as the medium runners around him made their first stops.

He made his first pitstop on lap 27 for another set of hard tyres, then made his planned switch to mediums when the virtual safety car was called for Carlos Sainz’s expiring Ferrari on lap 57.

But vibrations on those tyres “after the first sector” on his out-lap forced him to pit again on the very next lap, which dropped him to 14th before he fought through to take a single point in 10th.

Alonso believed it was possible to finish sixth, just behind teammate Esteban Ocon, before the problem arose, but said he”was very pleased and upbeat about the car performance” in the race.

When asked by Motorsport.com why he made a third stop, Alonso joked: “To have more fun and more overtaking!

“It was a tricky race, at the beginning we were all in a DRS train and that was quite difficult to overtake, but I felt so much faster than the cars around.

“In a way I’m very pleased and upbeat about the car performance today, because cars that we are fighting normally with, today they were really slow compared to our pace so that’s a very good sign.

“Once they pitted, we had some free air and we maximised our strategy, hard-hard-medium.

“We pitted under the VSC and we were heading to P6, because I was just behind Lando [Norris] with new tyres doing 1m08s at the end, it was very easy to pass them.

“Maybe finishing just behind Esteban [was possible] which could be amazing for the team, fifth and sixth, especially starting last.

“And I felt huge vibrations on the tyres immediately after the first sector so we decided to pit again. I exit P14, nine laps to go and I recovered to P10.”

Alonso was under investigation by race stewards for his Alpine being unsafe in its release during a pitstop, but was cleared after ther ace.

The Spaniard said he didn’t know why when he arrived to the media pen after the race.

At one stage, Alonso was squeezed on the straight between Turns 3 and 4 when he was overtaking AlphaTauri’s Yuki Tsunoda.

As he came past, Alonso wagged his finger at Tsunoda, with the Spaniard later telling media that he didn’t understand the AlphaTauri driver’s actions.

“I was on the grass, so I don’t know why he was pushing me that far,” Alonso added. “I was with the DRS on the grass, flat out, and there was no way to defend.

Alpine team boss Otmar Szafnauer says the cause of the vibration remains unknown at this stage, but ruled out it being a problem with the fitting of the wheel itself due to a new locking system the squad has.

“It’s a new thing for us, the FIA approved it. Tim Goss knows exactly how it works, and once the wheel is on it can’t come off unless you take it off.”