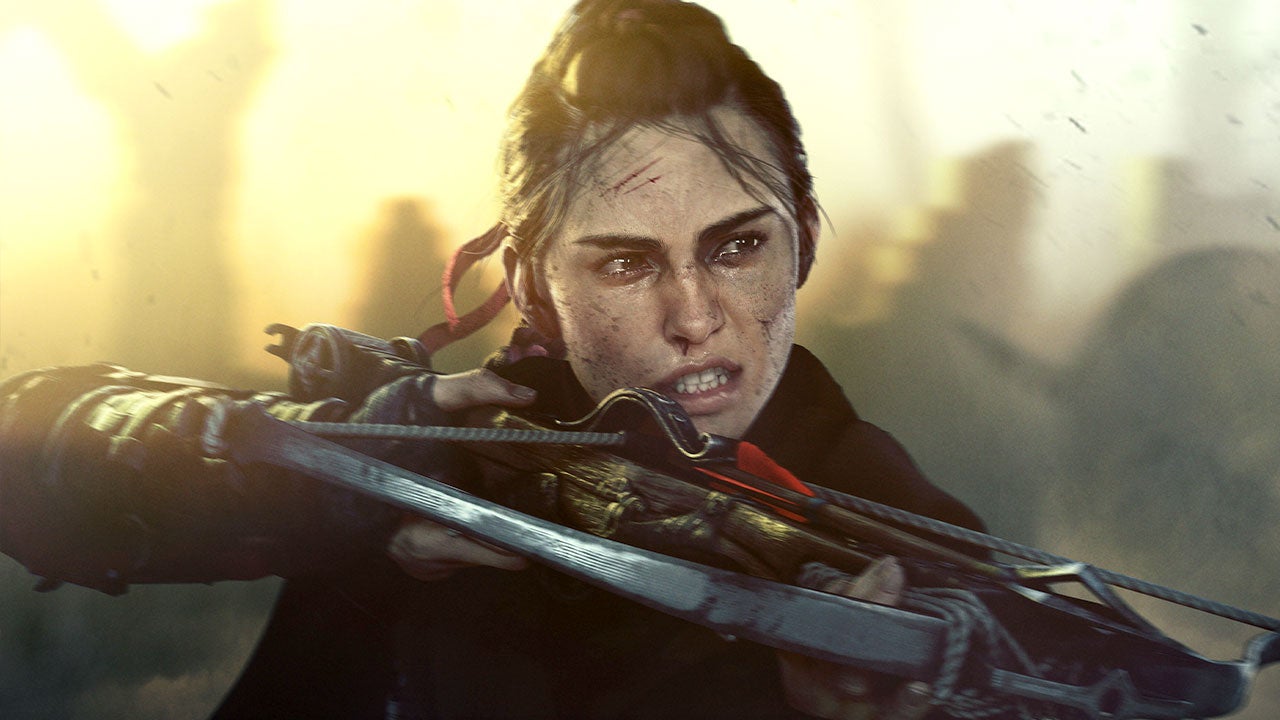 
While playing two full chapters of A Plague Tale: Requiem, I felt fully immersed in the harrowing world first established in developer Asobo Studio’s original game, A Plague Tale: Innocence. The emotive storytelling, engaging mix of puzzle and stealth gameplay, and yes, truckloads of rats, still remain. But what impressed me most were the steps forward that the sequel appears to be taking in all of the above areas. With much more involved combat systems and a smarter approach to stealth, there looks set to be a lot of fun to be had amongst all the blood, rats, and tears.

Requiem picks up six months after the events of Innocence, with siblings Amicia and Hugo looking to put the horrors of their first adventure in 14th century France behind them. Predictably though, where they go, trouble swiftly follows. And in this world, trouble equals rats. Despite claiming a victory at the end of the original, all is not well with Hugo. He’s clearly not fully overcome the illness that haunts his family, and so a journey to southeast France awaits in order to hunt for a cure.

If the original Plague Tale was centred on a loss of innocence for the de Rune children, then the sequel is about them wrestling with the guilt that comes with their actions. The demise of each enemy soldier (and there were quite a few in the short section I played) that comes between Amicia and her objective weighs heavily on her mind. She’s often seen stooped to the floor with her head in her hands, questioning why this nightmare is happening around them. This isn’t too dissimilar from her reaction to killing in the first game, but this time around there are more dimensions to Amicia with a greater range of emotions expressed — namely, anger.

Halfway through my time with Requiem, rage overcame Amicia, showing her in a completely different light than we’ve seen before. Guard after guard fell victim to my sling, as rock after rock cannoned off of heads like a deadly coconut shy. It was a display of pure violence unseen before in A Plague Tale, but what made it stick in the memory so strongly was the complete lack of remorse on Amicia’s part, who snarled as each rock snapped through the air.

If the original Plague Tale was centred on a loss of innocence, then the sequel is about the guilt that comes with their actions.

This newfound acceptance for what she believes is a necessary course of action is reflected in the new tools at her disposal. A hefty crossbow can now be used to take down enemies, including armoured soldiers that the sling’s projectiles would merely bounce off of. It takes a couple of seconds to wind up (this is 700 year-old weaponry being operated by a teenager, after all) but packs a hell of a punch when unleashed. To offset their power, it seems that crossbow bolts come in quite small supply, with only a handful found dotted around entire chapters. These bolts can be combined with materials to cause even greater effect, however, as can any type of ammunition such as rocks and throwable pots.

Some of these alchemical mixtures will be familiar to those who played Innocence — Ignifer and Extinguis, which light and put out flames respectively — as well as some new ones. In the section I played, I got to try out one of these additions: Tar. Launching tar onto a burning flame increases the radius of that light source temporarily, providing a potential solution to one of the game’s many puzzles. It also has its uses in combat; lure enemies into a pool of it before setting them ablaze with a neatly thrown Ignifer.

There’s over 20 different combinations of material and ammunition to play around with in Requiem, and it’s made all the easier to manage them with an improved crafting and weapon wheel. Switching weapons is smooth, and the fact that you now have unlimited rocks to hurl at all times is quite frankly a godsend. It’s not just Amicia that has new toys to play with though; her little brother Hugo is now able to flex his special relationship with France’s ongoing rat infestation.

Things went pretty off the deep end for the young man at the end of Innocence as he discovered he could control the rats with his mind. Hugo now seems slightly more in tune with his powers, and has some new tricks up his sleeve. Borrowing from other stealth-action games like Hitman or the Batman: Arkham series, an Echo ability allows you to pinpoint enemies through walls at quite long distances. Alongside this, the Imperium ability that allows Hugo to control the rats has been revamped. No longer do you target where you’d like the rats to swarm from a third person perspective, but instead you take your position inside the pack and hunt down your prey by directly controlling your tidal wave of rodents. It’s a much more satisfying way to unleash a horde on your enemies, with the results being quite vicious as rats overwhelm and consume foes so quickly that the echoes of their screams outlive them.

It won’t surprise anyone to hear that there are a lot of rats in this game. And despite the events at the end of the first game, it doesn’t mean they’re all your friends now either. Stray from the light and you’ll still end up as dinner, so carefully making your way through puzzle sections still makes up a considerable portion of the game. When they do appear they’re more a sight to behold than ever before, whether they’re erupting from beneath the ground or cascading through a valley like a deathly black tsunami. The technical limitations of Innocence allowed for 5,000 rats to be on screen at any time; with Requiem those shackles are off, with the tech impressively allowing for more than 300,000 to surround you at any moment.

At its core, the stealth combat and environmental puzzle gameplay loop of A Plague Tale: Requiem is largely similar to its predecessor, but there are improvements across the board. Requiem allows for a lot more experimentation in its combat situations than Innocence ever did, and its new, much larger arenas only encourage this. They also lend themselves to a much more satisfying stealth experience.

Stealth games are at their best when they make the player feel smart and in command of an encounter. The small, often corridor-shaped linear sections of Innocence never really offered this, but some of Requiem’s combat locations are cavernous by comparison. There now feels like there are numerous interesting options in each area, rather than only one way to deal with a group of enemies. It’s less like a simple paint by numbers puzzle, and instead like the challenge of building a LEGO set with half of the instructions missing. The influence of The Last of Us was clear to see in Innocence, and these larger combat areas and the way you can slink around them reminds me heavily of 2020’s Part 2.

Requiem allows for a lot more experimentation in its combat situations than Innocence ever did.

Some of the annoying quirks that can take you out of a stealth game have been smoothed out in Requiem as well. Mercifully, one hit deaths are no longer inflicted on Amicia outside of specific scenarios (unless playing on hard mode), allowing for you to endure a little damage before taking cover and healing. If you get too close to an enemy you now sometimes have the option to counter them. It also now seems much easier to re-enter stealth once your cover is broken by breaking sight lines and finding some long grass – another benefit of the larger arena sizes.

In a segment of my demo pulled from a latter part of the game, I was faced with a large open area of a quarry where a dozen or so soldiers were patrolling. I could choose to take the pacifist route and stick to long grass, crawling under conveniently placed carts and distracting guards with ceramics until I reached safety. Alternatively, I could opt to go less Solid Snake and more rampant rat, extinguishing every flame in sight before unleashing a pack of flesh-hungry rodents onto everyone in sight before strolling through the wreckage. Or, if I’d rather, go back to basics and take them out with Amicia’s new ability to stab with single-use knives found around the world.

Both passive and lethal routes are offered, and you’re encouraged to pick a style too. The new skills upgrade system reacts to the way you play and rewards you for your relevant actions through an invisible XP system. Take a more deadly approach and you’ll unlock new combat skills, but lean more into being a silent ghost and you’ll be granted new abilities to help you sneak around more efficiently. It’s a clever system that makes you think twice about how to approach each scenario, while subconsciously impacting the mindset that your specific Amicia takes through the story.

Outside of combat, the thing that struck me the most was how much more colour and life there is in the world, especially when compared to the largely grey and brown Innocence. The original was already graphically impressive, but Requiem looks downright gorgeous at times. The weather effects in particular are striking, with dark clouds rolling in and waves of light crashing against trees. This sequel is set in an area of France where you get to see glimpses of civilisation before the plague has had its full impact. One of the locations I saw allowed me to wander bustling streets full of all the welcome (and some unwelcome) sounds and sights of a butcher’s district, while more genuinely pleasant surroundings included rolling fields and a jovial campsite. While I can only presume that this ultimately won’t be a happy-go-lucky story of two siblings taking in all the beauty the south of France has to offer, it’s very welcome to not constantly feel like you’re in the gutter this time around.

The original was already graphically impressive, but Requiem looks downright gorgeous at times.

It doesn’t seem all doom and gloom for the de Runes then, with the variety I saw in environments echoing the improved scope of gameplay options. While I can’t shake the feeling that it all seems very familiar and not necessarily the giant leap forward that some may have been expecting, Requiem does at the very least appear to be the refining of an already successful formula. Whether it all comes together to take A Plague Tale to the next level is still to be fully seen, but from the roughly 90 minutes I played I’m left very hopeful that we’re all set for a fun, yet undoubtedly emotionally harrowing time.

Cyberpunk Edgerunners: Anime Protagonist Was Referenced in the Game Two Years Ago – IGN