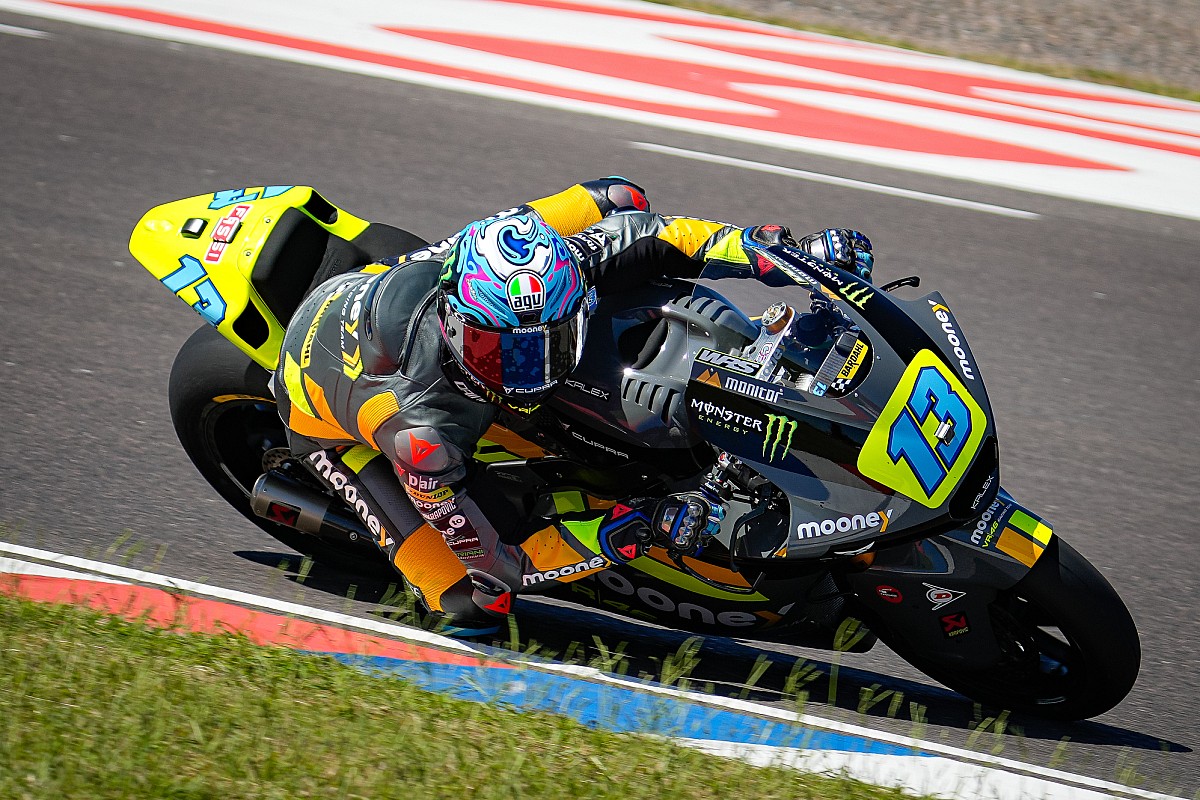 
What happened in Moto3’s Argentina GP?

Sunday’s race bill began with the 21-lap Moto3 grand prix, with Aspar’s Sergio Garcia starting from pole and grabbing the holeshot at the start.

For the first half of the race, Aspar GasGas duo Garcia and Izan Guevara ran at the front – with the latter leading the way.

However, disaster would strike with 10 laps remaining when Guevara GasGas machine cut out as he exited the Turn 3 right-hander and was forced out.

The podium battle would be further broken up when Ajo KTM’s Jaume Masia was taken out in a collision instigated by Snipers Honda rider Andrea Migno at the penultimate corner.

Having charged through from outside of the top 10 at the start, Leopard Honda’s Dennis Foggia battled with Garcia for the victory in the closing stages.

With the Leopard rider leading onto the final lap, a daring raid up the inside of Foggia at the penultimate gave victory to Garcia.

Garcia now leads the championship by four points from Foggia, with Guevara third a further 26 back.

Ayumu Sasaki recovered from an early long-lap penalty for causing a collision in the previous Indonesian GP to put his Max Racing Husqvarna on the final step of the podium, with SIC58 Honda rider Riccardo Rossi fourth.

Tatsuki Suzuki did cross the line fourth on his Leopard Honda, but he was dropped a place for exceeding track limits. He ended up ahead of MT Helmets KTM rookie Diogo Moreira, Ajo KTM’s Daniel Holgado, Prustel GP’s Carlos Tatay and CIP KTM duo Kaito Toba and Joel Kelso.

What happened in Moto2’s Argentina GP?

The Spaniard led in the early stages before VR46 rider Vietti overhauled him.

Having made history on Saturday by becoming the youngest ever intermediate class pole winner, there would be no dream ending to 17-year-old Aldeguer’s Sunday.

Trying to capitalise on a mistake for Vietti at the penultimate corner, the pair made contact as Aldeguer went up the inside and was sent into a highside.

Vietti would come under attack from Indonesian GP winner Somkiat Chantra and was overtaken midway through the race.

But the VR46 rider would soon fight his way back into the lead and held Chantra at bay to claim his second win of the season to take a 21-point lead in the standings.

Canet snatched third from Ogura at Turn 7 on the final lap, but Ogura executed a superb overtake at the penultimate corner to take third.

Jake Dixon was fifth on his Aspar Kalex ahead of Marc VDS rider Tony Arbolino, while reigning Moto3 champion Pedro Acosta was seventh on his Ajo KTM Kalex.